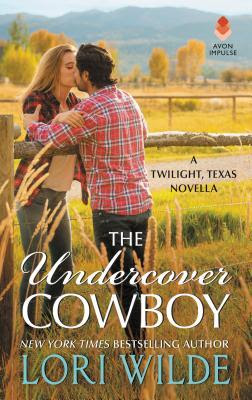 If you love Jennifer Ryan or Maisey Yates, you won’t want to miss this Twilight, Texas novella from Lori Wilde!

Allie Grainger appreciated eye candy as much as the next gal, but she never expected to be rescued by it! On her way to a job interview, she was nearly trampled by a small herd of Texas Longhorns during Twilight’s Wild West Cattle Drive. Luckily for her, a shirtless cowboy actually swept her off her feet and onto the sidewalk. Perhaps she should walk and text more often.

But Kyle Richmond was no “mere” cowboy. Sent by the FBI to uncover an art theft ring, he was in Twilight, getting leads on a series of robberies that went from one end of the country to the other. Soon his clues lead him right in the direction of tempting, irresistible Allie. How can so much trouble be tied up in such a delectable package? And what will happen when Allie discovers the truth about this undercover cowboy?

The Undercover Cowboy is the third Twilight, Texas book I've read. It is completely a standalone read. There isn't any mention of past characters, at least none that I know of or remember.

The Undercover Cowboy pairs a hero who is a hardened cop with a heroine who is sunny with an optimistic soul. Kade Richmond is a Twilight police detective working undercover to bust an art theft ring. Allie Grainger is a glass-is-half-full woman. She thinks in the moment and believes that her inner voice will guide and protector her. The two meet when Allie is almost trampled by a herd of out of control cattle on her way to a job interview at a pop-up art gallery. The same place Kade has under surveillance. When Allie gets the job, Kade can't figure out if she's an active participant in the theft ring or an innocent bystander. All he knows is that he has to get close to her. He just never expects to start having real feelings for her.

I liked Kade immediately. I loved the fact that while he had a job to do, he was still conflicted by the lies he had to tell. Allie was a little difficult. Not because she wasn't truly likable, but because she was so naive. It was a little grating for a 24-year-old to be that way. I loved that through the course of the book, she realized she could stand on her own two feet. There is a little suspense with regard to the art theft ring. I will admit to being surprised by how things went down.

Overall, The Undercover Cowboy was a good story. However, at times I thought the story was a little sugary sweet. The next book in this series is a Christmas romance. I have to say that Twilight, Texas and Christmas romances go hand and hand. I’m looking forward to reading The Christmas Dare.