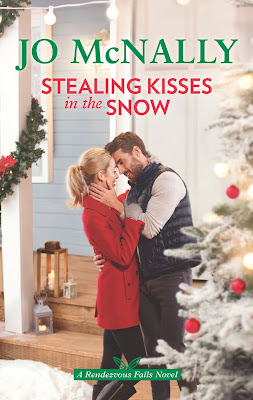 Single mom Piper Montgomery’s plate is full. Between her two adorable kids, two jobs and a fixer-upper house, she’s so busy she can hardly see straight. But when rugged biker Logan Taggart strolls into the inn where she’s working, she can’t help but stare. He has bad boy written all over him. And with two kids relying on her, that’s the last thing she needs this Christmas.

Rendezvous Falls is nothing but a pit stop for Logan. Once his grandmother is back on her feet and ready to reclaim the inn, Logan can get back on the road. It’s where he belongs, even if his grandmother’s matchmaking book club try to convince him otherwise. Still, there’s something about beautiful spitfire Piper that makes him wonder if family and forever might just be what he needs after all.

But as the holidays draw ever closer, so do Piper and Logan. Could these polar opposites find that all they want this Christmas is each other?

Hi Jo. Welcome to Read Your Writes Book Reviews. How are you?
I’m great, if a bit frazzled. My husband and I just got home from a wonderful bucket-list trip to Iceland last week, and now we’re in the midst of moving from our North Carolina home and heading back to the Syracuse area in New York. There are a lot of boxes and bubble wrap in my life right now! We hope to be settled by Christmas, just in time to enjoy some holiday romances.

Oh wow. You definitely are busy. Good luck with moving! Congratulations on the upcoming release of Stealing Kisses in the Snow. This is the second book in your Rendezvous Fall series. Could you please tell me about the series?

This series is set in upstate New York in a fictional lakeside college town. The town is famous for its colorful Victorian houses, and is home to many festivals and events that bring people to the town. What sets this series apart is a senior book club that’s more than just sassy - they’re downright bawdy! They like to play matchmaker, but they’re not very good at it. They’re always setting up the wrong people, but love finds a way to bring the right couples together. A different member of the book club gets a POV in each book--in Stealing Kisses in the Snow, it’s 80-year-old Iris, who’s dealing with a broken hip and the fear of losing the Taggart Inn after running it for fifty years.

You’ve mentioned that Rendezvous Falls is a fictional town. Is it based on a real place or is it just a creation of your imagination?
Rendezvous Falls is a fictional town in the very real Finger Lakes wine country of upstate New York. I put it on the western shore of Seneca Lake, and refer to real places on the lake like Geneva and Watkins Glen. I love elaborate Victorian houses, and upstate New York has a lot of them. I thought it would be fun to create a town full of colorful Victorian homes, and juxtapose the frilly houses with a younger generation making the town their own.

I love the sound of this story. Could you please tell me about Piper Montgomery and Logan Taggart, as well as what it is you like/love about them?
Logan and Piper were so much fun to write! She’s a frazzled, widowed mom of two who’s just determined to make a happy new home with her children, Ethan and Lily. She’s bought a house that’s more of a fixer-upper than she expected, and she’s promised her children a “perfect” Christmas no matter what. Logan is a laid-back oil rig worker who has no intention of putting down roots anywhere. The only reason he’s in Rendezvous Falls is because his grandmother broke her hip and someone has to run the Taggart Inn. Which is what Piper thought she was doing. Logan is big and rugged--Lily calls him “Logan the Giant”--but he has a quiet steadiness that draws Piper in. He’s one of my favorite heroes because of that calm-in-the-storm, perpetually amused character of his. He rides a Harley and he reads Hemingway.

Piper has two kids. Stealing Kisses in the Snow is the first book you’ve written, which includes children. How did the addition of adding children change your approach to writing the story? Did you find it difficult to truly capture their personalities?
Any time you add more characters, it complicates a story. And I find children (just like in real life!) can take over a storyline. I’m very visual, so during revisions, I mapped out the scenes for this book on index cards, and used highlighters to indicate which characters were in which scene. When I spread out the scene cards on a table, I could see right away if a character was getting too much, or not enough, page time. Children can come across as one-dimensional in books--always sweet or always bratty--so I worked hard to make sure there were nuances with these kids. Lily is a bubbly, bouncy, precocious 4-year-old, but the reader comes to see that Lily’s desire to make sure people are happy runs deeper than just being a “cute kid.” And Ethan is a typical monosyllabic teenage boy, but he’s sweet to his sister when he doesn’t think anyone is looking.

What was your favorite part about writing Stealing Kisses in the Snow and why?
This was my first holiday romance, and that was really fun. I love Christmas, but I also think we can put a lot of pressure on ourselves to live up to the ideals we see in the media, or even in the popular movies and shows. So it was fun to write about Piper’s determination to create that perfect Norman Rockwell Christmas, and then see everything go wrong. Even falling in love with Logan was a complication, because she wasn’t sure being in love again was fair to her children. The book ends on Christmas Day, and we get to see what a “perfect” Christmas really looks like.

You really have my heart doing a happy dance right now. Can you tell me about one of your favorite scenes from the story?
Well, there’s a scene in the attic during a snowstorm that’s pretty awesome, but I probably can’t talk about those details (wink wink). So I’ll go with the scene in Piper’s house, when she tackles a plumbing job in the kitchen after watching an online how-to video. Things don’t go as planned, and suddenly there’s water spraying everywhere. She tells Lily to call Logan next door while Ethan frantically tries to help, and Logan comes running when he hears screams in the background. It’s a wild, slapstick scene. At one point they all look at each other, soaking wet, and burst out laughing. It’s the first hint that these four people could actually become a family.

Oh. I love that! There’s always that one character who refuses to play nice. Which character gave you the most difficult time?
I had a hard time keeping Logan and Piper apart! Piper loved her late husband very much, so her feelings for Logan are a complete surprise, and cause a lot of conflict for her. She keeps thinking that she’s a responsible mom of two who’s already been lucky enough to be in love once, so she shouldn’t be sneaking around kissing this biker dude next door. But every time they were together, I had a hard time making her remember all that—I couldn’t keep her away from the man!

Lol. Stealing Kisses in the Snow is your first Christmas romance. How did you get into the Christmas state of mind, to write the book?
Funnily enough, I have a Christmas coffee mug that never got packed away last Christmas (there’s always something left out, right?), so I drank from that Christmas tree mug almost every day while writing. I grew up in upstate New York (not far from the Finger Lakes where the series is set) so it’s easy for me to summon up snowy holiday images in my mind.

Jo, as I said, Stealing Kisses in the Snow sounds really good. Thank you so much for taking the time to answer some questions for me.
Thank you so much for inviting me. Logan and Piper ended up being the kind of characters I’d like to know in real life, so I hope readers enjoy the book as much as I enjoyed writing it.

The woman hesitated, glancing back at her daughter. Momma Bear had saved her cub. She swallowed a couple times, then gestured to the door with the mop. Her voice still shook, but the volume lowered.

“I’m sorry I startled you. I’ve had a long-ass…” He glanced at the kid and grimaced.

“It’s been a long trip, and I got caught in a rainstorm just south of here. I haven’t eaten since yesterday’s dinner…”

Her eyes softened a fraction, even as she held the mop out firmly. She nodded toward the door. “The Methodist church three blocks over has a food pantry, and the Catholic church does soup and bread every Wednesday for whoever stops in. Father Joe might be able to help you find a place to sleep. But you can’t stay here.”

Logan couldn’t stop his bark of laughter, even though it made her jump. She thought he was homeless? He couldn’t decide if he was offended or impressed. Clearly scared out of her wits, she was still kind enough to offer him a chance at hot food and a bed. Yeah, definitely impressed. It was no surprise she worked for his grandmother, who was also a tough-as-nails woman who cared about others far more than she ever let on. Her eyes started to narrow again, so he tried to clarify that he wasn’t some random vagrant.

“Actually, I can stay here.”

She lifted the cell phone. Not good. His words tumbled out. “I’m Logan Taggart. This is my grandmother’s place. I know I look like Sasquatch right now, but I’m honestly just here to help my grandmother.”

Jo McNally lives in coastal North Carolina with 100 pounds of dog and 200 pounds of husband – her slice of the bed is very small. When she's not writing or reading romance novels (or clinging to the edge of the bed...), she can often be found on the back porch sipping wine with friends, listening to great music. If the weather is absolutely perfect, she'll occasionally join her husband on the golf course, where she always feels far more competitive than her actual skill-level would suggest.

You can follow the Stealing Kisses in the Snow Blog Tour here.

a Rafflecopter giveaway
Follow
Posted by Kim at 3:20 AM