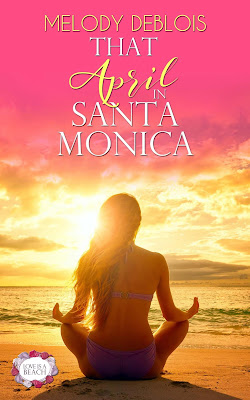 Madison receives acclaim for running a talent agency for people with disabilities, but she doesn't know how to take care of herself. When her altruism becomes life-threatening—a matter of either develop healthy habits or die—she joins a reality TV show that pairs her with hot, raven-haired Brandon. He is witty, sexy, and her teacher. That makes him off limits.


After a successful run on a soap opera, Brandon stepped away from empty fame and now focuses on his work as TV's most noted health teacher. He has one fast rule—never fall for a student. But when he meets Madison, their chemistry is combustible. There's no hiding their conflict or their attraction, especially when it's all caught on film.

Hi Melody. Welcome to Read Your Writes Book Reviews. How are you?
I am great, happy to be here. Thank you for asking.

You’re welcome. Congratulations on the release of That April in Santa Monica, the first book in your Love Is a Beach series. First off, please tell me what readers can expect from the series?
All three books in the series take place in beach communities in Southern California. Audrey Powell, who is in the first book, is the heroine in the second book in the series. Bennett Browning, a character in the second, will be the hero in the third installment. The books all center around family and the hero and heroine not only learning to love one another but changing to become the best version of themselves they can be.

Can you tell me about That April in Santa Monica Twitter style?
For the first time since his mother’s death, Brandon allowed himself to experience all the emotions over losing her. And that led to his sorrow over having driven Madison away.

Oh. It sounds like these two are going to have their work cut out for them, in order to find their happily-ever-after. Tell me about the characters of Madison and Brandon.
I love Madison because she’s gutsy, strong-willed and she puts others above herself. I love that she’s a self-proclaimed clothes horse. I can identify. I love that she never throws in the towel, even when she makes a fool of herself. I love her when she’s been brought down a peg and when her flaws are out for all to see. I love the way she changes and realizes that family means everything to her. I love it when she and her niece go out in the ocean, even though Madison is scared to death.

I love Brandon because he’s a goofball, a health nut, and he’s scarred and yet he’s so kind. He’s like all the kind men who I had the privilege to have in my life. To me, the mark of a man worth writing about is that he’s kind. I love the way Brandon accepts the big lug of a dog with no questions asked. I love it when he doesn’t say boo when the children come to stay. I love the way he’s always on Madison’s side.

You have a lot of love for these two. My heart just got really excited. Madison has a burning desire to help others, even to the detriment of her own health and life. Was there something in her past which made her so focused?
Good question. Oh my, yes. Her parents were marine biologists who were lost at sea. She raised her sister and her baby brother. “When Webster stuck the word sacrifice in the dictionary, he was referring to Madison,” her sister says of her. Madison gave up acting and built up her clientele at a talent agency, but when she noticed people with disabilities weren’t being represented accurately in the movies and on TV, she opened up her own agency.

Madison sounds extremely admirable. Can you tell me how you came up with the title for the book and if it means something?
Originally, the title was I’ve Grown Accustomed to Your face because I’d started out with a Pygmalion trope. Along the way, though, I changed it to Balancing Act, which it would probably still be if The Wild Rose Press hadn’t already published a book with the same title. Coming up with That April in Santa Monica happened in a flash. I like it best now.

Not only is That April in Santa Monica the first book in your upcoming new series, but it’s also your first published book. What was your writing process like?
I wrote 55,000 words during NaNoWriMo. (National Novel Writing Month) I got an idea for the story, and I was off and running. At the end of the month, I had the bare bones of a book. I’d like to tell everyone it only took just another month to accomplish the rewrite. The truth is it took constant layering for the next two years to get the book the way I wanted it. I write painstakingly slow; which I guess I’ll have to change. I see other writers getting a draft out lickety-split, polishing and publishing soon after. I hope to improve my speed.

What’s your favorite part of a romance to write?
To me, the beginning is the roughest part. I have a difficult time letting it go and moving on. The end is pretty much the same because there are all those threads to blend and tie together. The middle—some refer to as the sagging middle—is my favorite part. I write faster and don’t stew over it. I often get lost in the story while writing about the hero and heroine falling in love.

What’s next for you?
I’m writing the second in the series called Undercover in Venice Beach.

Struggling business owner Audrey Powell has just lost her mother. She’s returned to Venice Beach to take over the tea house her mother made so special. She’s determined to keep Mama’s spirit of helping others alive. But she has no one to help her run things…until enter Liam James, the hunky chef who works miracles with food.

Liam James is a spy with British Intelligence. He sets up surveillance in the tea house where secrets are being leaked that threaten national security. To fit in with the clientele, he must work under the guise of a chef. Never has he allowed a woman to get in the way of a mission until he meets Audrey. Trouble is, she isn’t who she claims to be.


Undercover in Venice Beach sounds really good. Melody, thank you so much for taking the time to answer some questions for me. Congratulations again on your new release.
Thank you for having me. It’s been a pleasure.

On the beach, Madison started to gather energy, so that when they went into downward-facing dog, he discovered, with her well-earned agility, she didn’t bend her knees as usual.

She was unimaginably beautiful. The way the sun seized the golden streaks in her red hair, the way the natural wave framed her angular face, distracted him. He had his fantasies about her, and this was one of them. The two of them by themselves on the beach, doing yoga. The only problem? The usual. They were not alone.

Warrior pose brought with it an expression of victory on her part, and child’s pose caused her to fold up within herself like a flower after sunset. No woman had ever done the positions with as much raw sensuality. Being with her made him, the yogic practitioner, forget how to move and how to breathe.

When they finished, she purred, “I just might learn to love this.”

“Do you think it was the fancy yoga outfit?”

He shook his head. “Nah, I think it was the woman.” 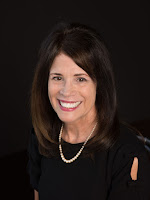 Born in California, award winning author, Melody DeBlois follows the sun. When she isn’t swimming laps, she’s writing sweet and sassy romances. Her heroines are self-reliant and smart and her heroes are kind by nature and love dogs. She lives in California during the summer and spends winters in Arizona with her husband. She has plotted her novels while hiking the beach or trekking across the desert. Her most treasured possession is family.

You can follow the That April in Santa Monica Blog Tour here.

a Rafflecopter giveaway
Follow
Posted by Kim at 1:40 AM