Review ~ A MISTLETOE KISS FOR THE SINGLE DAD by Traci Douglass 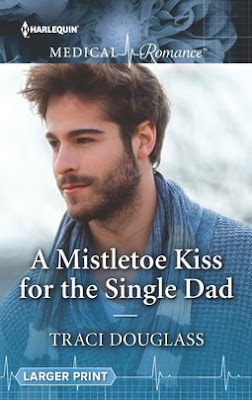 GP Nick Marlowe returned to his hometown to focus on raising his young son. The last person he expects to see in Bayside is high-flying Beverly Hills surgeon Belle! The childhood sweetheart he’d let go so she could pursue her dream of attending medical school. Only, now they’re working side by side to reopen her late aunt’s free Christmas Eve clinic, their magical connection returns… Could a mistletoe kiss spark another chance—just in time for Christmas?

A Mistletoe Kiss for the Single Dad is a second chance romance eighteen years in the making. Belle Watson and Nick Marlowe first met when they were just kids. They went on to become high school sweethearts. Belle’s dream was to always become a doctor like her deceased parents. Nick wanted to become a doctor as well. Not wanting to dim her light or dissuade her from her dreams, Nick broke up with Belle after high school, even though he broke his heart in the process.

Fast forward eighteen years and things are very different for these two. The two have not remained friends and aren't really on speaking terms. The death of Marlene, Belle’s aunt and only relative finds her returning to her hometown in Bayside, Michigan. The reading on Marlene's will brings Belle and Nick together. Marlene leaves each of them cash and equal ownership in her clinic. Her last wish is that the two will reopen the free clinic one last time on Christmas Eve. Nick is all for fulfilling Marlene’s last wish, Belle isn’t so sure. Christmas Eve is nine days away and she only has three days until she has to get back to her work and patients in Beverly Hills, California. Realizing that she owes this to her aunt, she agrees but has no plans of making nice with or forgiving Nick for breaking her heart and moving on.

My first impression of Belle was not a good one. I thought she was snobby and forgot where she came from. But that couldn't have been further from the truth. She was just trying her best to distance herself from the situation emotionally and deal with seeing Nick again. I found Nick to be an interesting hero. The years since he parted ways with Belle really affected him. He carries around the guilt of his wife dying, of her not following the dreams that she had for herself, and being a single parent to his eight-year-old son Connor.

I often find reading a book as a way to escape for a few hours. A Mistletoe Kiss for the Single Dad was just that. A nice little escape. Once I got into the story, I enjoyed the journey Traci Douglass took me on. Belle and Nick turned out to be two characters who were conflicted about their lives but didn't want to admit so. Little Connor was the only one who knew where he wanted to go and what he wanted to happen. They were all really good together.

I wasn't expecting Traci to bring tears to my eyes but she did. That part of the story was so unexpected, sweet, and amazing. You know how you read a book and you don't want it to end? That's how I felt about A Mistletoe Kiss for the Single Dad. I wish I could see Belle, Nick, and Connor tomorrow, the day after that, a year from now and so on. I would really love to just watch them carry on with their lives.


“Miracles happen all the time.”

“Rare things were often the most prized.”

USA Today Bestselling Author Traci Douglass writes fiction bursting with romance, usually mixed with a healthy portion of snark. Her stories feature sizzling heroes with quick wits and troubled pasts and smart, independent heroines who always give as good as they get. Her books are published with Harlequin/Mills & Boon, Entangled Publishing, and Tule Publishing.