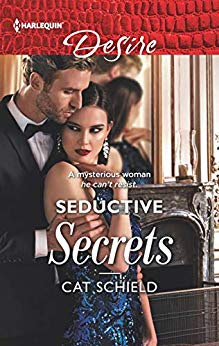 A mysterious woman he can’t resist.

“I intend to get to know the real you.”

When one of Charleston’s oldest families is infiltrated by a beautiful stranger, tycoon Paul Watts vows to reveal the truth. But when his grandfather’s health miraculously improves after mistaking Lia Marsh as a long-lost granddaughter, Paul has no choice but to follow along. While he must expose Lia, soon he’s the one with the secret—he desires the woman who could destroy everything he holds dear…

Seductive Secrets is the first book I’ve read in Cat Schield's Sweet Tea and Scandal series. I found the story to be a true standalone read. I was drawn to the story because I wanted to understand how Lia Marsh embedded herself into the Watts family and why. Once I picked up the book, I was captivated by the yin and yang between Lia and eldest grandson, Paul. These two are completely opposites. Paul Watts is a former cop turned cybersecurity specialist. He's suspicious and skeptical of people by nature. Lia is kind and open. She is into spiritual healing and seems to think with her heart. She's not used to staying in one place for long, whereas Paul and his family have lived in Charleston for generations.

The patriarch of the Watts family, Grady, isn't doing so well. The family is worried that the 85-year-old doesn't have much time left. It seems Grady has lost his will to fight. Fearing for his grandfather, Ethan, Paul’s younger brother, asks Lia his massage therapist to visit Grady in the hospital. Ethan just never expects Grady to think Lia is his long-lost granddaughter. With each visit Lia makes, Grady's health improves. Ethan comes up with the idea for Lia to pretend to be his Aunt Ava's daughter. Wanting to help out Grady and the family, Lia reluctantly agrees. As a way to make sure everyone believes Lia is Ava’s daughter, Ethan tells them Paul is the one who found Lia. To say Paul is not happy is the understatement of the year. However, he can’t deny Lia’s presence isn’t benefiting his grandfather.

Not trusting Lia, Paul vows to keep an eye on her. To his shock and displeasure, he’s attracted to Lia. He finds himself wanting to spend time with her. “You’re not like anyone I’ve ever known before and frankly, you scare the hell out of me.” Lia is equally attracted to Paul, but knows there can never be anything between them. She knows he doesn’t trust her and she doesn’t plan on staying in Charleston much longer. The universe has a plan for these two, and it doesn’t matter if they agree or not.

From start to finish, I LOVED Seductive Secrets. Cat has done an incredible job of creating a well-rounded, likeable family, with an interesting history. Every single character brought something to the story. Paul and Lia are perfect for each other. I’m in love with Ethan and I desperately want him to have a story. There’s also Paul and Ethan’s cousins, the twins. I would love for them to have their own story as well. This is my second time reading Cat Schield and I’m looking forward to reading more of her books.

“Sometimes if you open your heart, the answers will shine like the midday sun.”

“I like the way you believe you’ll have a choice.”

“You’re not like anyone I’ve ever known before and frankly, you scare the hell out of me.”

“You’ve brought magic into my life.”

“Love requires a leap of faith.”

“You shouldn’t underestimate yourself.”

**Received a copy of the book from the author and voluntarily reviewed. Also purchased a paperback copy myself.**

The Sweet Tea and Scandal Series: