Character Interview & Giveaway ~ A LEGACY OF MURDER by Connie Berry 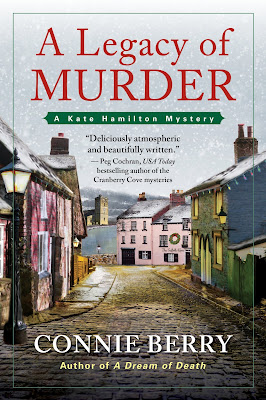 American antique dealer Kate Hamilton's Christmastime jaunt to a charming English village leads to an investigation of a missing ruby...and a chain of murders.

It's Christmastime and antiques dealer Kate Hamilton is off to visit her daughter, Christine, in the quaint English village of Long Barston. Christine and her boyfriend, Tristan, work at stately-but-crumbling Finchley Hall. Touring the Elizabethan house and grounds, Kate is intrigued by the docent's tales of the Finchley Hoard, and the strange deaths surrounding the renowned treasure trove. But next to a small lake, Kate spies the body of a young woman, killed by a garden spade.

Nearly blind Lady Barbara, who lives at Finchley with her loyal butler, Mugg, persuades Kate to take over the murdered woman's work. Kate finds that a Burmese ruby has vanished from the legendary Blood-Red Ring, replaced by a lesser garnet. Were the theft and the woman's death connected?

Kate learns that Lady Barbara's son fled to Venezuela years before, suspected of murdering another young woman. The murder weapon belonged to an old gardener, who becomes the leading suspect. But is Lady Barbara's son back to kill again? When another body is found, the clues point toward Christine. It's up to Kate to clear her daughter's name in Connie Berry's second Kate Hamilton mystery, a treasure for fans of traditional British mysteries.

Hi Kate. Welcome to Read Your Writes Book Reviews. How are you?
Just fine, thanks. I'm delighted to meet you and share a bit about my latest adventure in Suffolk, England.

Could you please introduce yourself. Where are you from? Where do you live now? What do you do for a living?

Thanks for asking. My full name is Katherine Kristine Larsen Hamilton. I'm named after my two Norwegian grandmothers, Katherine and Kristine, but everyone calls me Kate. I added Hamilton to my name when I married my late husband, Bill. We met at Case Western University when I was pursuing a master's degree in history and he was a professor in the law school. Southern Wisconsin is where I was born and grew up, but I now live in Jackson Falls, Ohio, where I run a small shop, Antiques at the Falls, specializing in fine objects from the seventeenth, eighteenth, and nineteenth centuries. I'm also a certified appraiser and do a little freelance work for local insurance agencies.

Some readers first met you in A Dream of Death. In that book, you teamed up with a British detective inspector to find out who killed your sister-in-law. How did the events in that book shape you?
Life is seldom what we expect, is it? What I thought would be a quick trip to help out my sister-in-law, proprietor of a historic country house hotel in the Scottish Hebrides, turned into (even now I can hardly believe it) a murder investigation when her body was discovered the morning after the annual Tartan Ball. Detective Inspector Tom Mallory of the Suffolk Constabulary was also a guest at the hotel, and we pooled our talents to uncover a ruthless killer, determined to rewrite island history—and, as it turned out, my future. How this shaped me is a question I'm still pondering, but I know those days in Scotland changed me forever. Instead of looking back, I'm now looking forward, although what the future holds is still a mystery.

I'm sorry for the loss of your husband. I understand in A Dream of Death you felt driven to prove your husband's friend Bo didn't kill your sister-in-law.
Thank you for your sympathy. I don't mind talking about Bill's death, but I do get a bit annoyed when people tell me I'm "too young" to be a widow. I mean, what is the proper age to lose the person you love? Sorry—my snarky humor gets me in trouble sometimes. You're right about my husband's friend, Bo Duff. Bill and Bo grew up together on the Isle of Glenroth and formed a bond of friendship and loyalty. Bo is an intellectually disabled man with a big heart and a genius for fixing anything mechanical. When the police suspected him of my sister-in-law's murder, what else could I do but defend him? I knew Bo wasn't capable of harming anyone, and Bill would have wanted me to protect him. The problem was finding the real killer before Bo's life was ruined forever.

Am I correct in assuming you have potentially found someone new in Tom Mallory, the detective inspector?
That's another question I'm wrestling with right now. Tom has definitely touched my heart, but how can a transatlantic romance lead to something permanent? Tom's family, job, and life are in Suffolk, England. Mine are in Jackson Falls, Ohio. One of us would have to leave everything and start again. I can't see that happening, can you? Still....

A Legacy of Murder finds you visiting your daughter, Christine, at Finchley Hall, her place of employment. But you have discovered another crime, the death of an intern. What persuaded you to get involved in the investigation?
Christine is a second-year student at Magdalen College, Oxford. Between terms she and her boyfriend, Tristan, have internships at Finchley Hall, which just happens to be on Tom Mallory's patch. On my very first day in England—if you can believe it—I was part of a tour group that discovered the body of another intern, a young woman handling the exhibition of a treasure trove known as the Finchley Hoard. As I said at the time, finding one body could be considered bad luck; finding two in the space of thirty days was beginning to feel more like destiny. Even my calm, logical mother is beginning to make remarks about "my bodies." Good grief—it isn't as if I go looking for them! This time I was forced to get involved when my daughter ended up as a suspect. I know Tom had to follow police procedure, but there were aspects of the case that only I could unravel. To find out more, you'll have to read the book.

Can you tell me a little bit about what readers can expect from A Legacy of Murder?
I hope readers will find a cracking good mystery and a story that will keep them guessing until the end.

How do you feel your creator, Connie Berry, has handled writing your story and the situations she's put you into?
What a great question! Connie knows me pretty well. After all, she and I share a lot in common. We were both raised by dedicated antiques collectors and dealers; we share our Scandinavian roots; and we both suffer from acrophobia (an irrational fear of heights). To be honest, I'm still a bit resentful about the way Connie forced me to face those fears in A Legacy of Murder. There she was, safe at her computer desk, while I struggled with the prospect of falling to my death! How fair is that? I'll get my own back by telling you that I am taller, slimmer, and younger than she is. If she denies it, don't be fooled.

A Legacy of Murder takes place during Christmastime. What's your one Christmas wish?
What could be lovelier than an English Christmas? As a child I saw an image in an Ideals magazine of a thatched cottage in an English village. A log fire blazed inside while outside the snow fell softly. Now that I've had that experience, my Christmas wish is for more adventures—and more time with Tom. Who knows what may happen?

Kate, thank you so much for answering some questions for me.