Hi! I hope you’ll enjoy the peek below at my sweet romance, One Week to Win Her Boss. This winter holiday story is set in the small town of Snowflake Valley, which caters to tourists 365 days of the year.
The book is currently on sale for 99 cents through November 18. 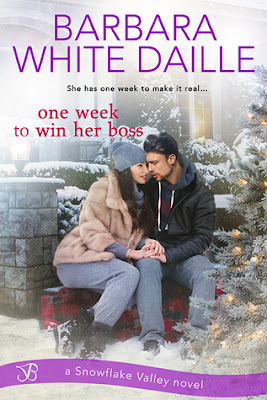 She has one week to make it real...

Single mom Amber Barnett loves family, kids, Christmas…and unfortunately, her boss, confirmed bachelor Michael DeFranco. It's a crush she really needs to get over. Except, when she’s temporarily forced from her apartment, her only option is to stay at Michael’s private ski lodge, where she's the housekeeper. No problem. Her handsome boss rarely visits Snowflake Valley unexpectedly, plus he’s spending the holidays with his family. Or so she thinks…

A stormy Christmas Eve reunion leaves Michael seeking the solitude of his lodge, where he finds Amber in residence—and in trouble. Attempting to save her from her matchmaking family, he announces they’re a couple. His good deed backfires when they’re instantly included in each and every holiday event in town. So much for solitude.

Only the more time he spends with the beautiful, cheery brunette, the more he yearns to make things real between them. But he and Amber want different things, and Michael could never be the family man she's looking for. 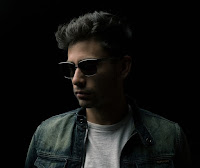 Occupation: Owner and CEO of an electronics company.

3 dislikes in no particular order: Injustice. People who text and drive. Christmas holidays.

Drink of choice: Coffee, especially first thing in the morning

Choice of transportation: A custom-built SUV

Favorite way to spend an evening: Hanging out in front of a fireplace after a day on the ski slopes

Best memory to date: The day my company incorporated.

If you could have a do-over, what would you do differently? Worked harder at keeping my family together

Is it possible to survive tragedy and find happiness again? Not so long ago, I’d have said a solid NO. Now, thanks to Amber and her family, I’m having trouble holding onto my own convictions.

What’s something you’ve said you would never do, but in fact have done? Take care of a baby again.

Most romantic gesture: From me? Well, I can’t take full credit for it since I had some assistance, but the most recent romantic thing I’ve done is kiss Amber under a sprig of parsley. (Long story.)

Words to live by: Right now, what I’m trying to convince Amber to believe: “No matter how much I’d want to, I could never be the right man for you.”

In this scene, Amber’s first encounter with Michael’s brothers gives her a new perspective on the concept of family:


Recalling what Michael had told her the other day about flying fists and broken glasses at his family’s table, she jumped into the conversation. “Well, it’s great to meet you all. I’ll have to introduce you to my brothers and sisters later.”

“Are the girls as hot-looking as you?” Derek asked.

The other man shrugged. “Just calling it as I see it.”

“I thought she was the housekeeper.”

She wanted to cry at yet another reminder of that fact. She wanted to get out of this situation before Michael found out she had gotten him into it. “I am the housekeeper. And right now, the cook.”

“A great cook,” Lee said with a grin that reminded her faintly of Michael’s. “The pancakes were awesome.”

“Thank you.” She smiled back at him.

Like the smell of breakfast sausage, a silence hung over the kitchen. It was broken only by the sounds of forks hitting plates and coffee mugs thumping against the tabletop. So different from mealtimes with her family, when two and three conversations went on at once.

Finally, she said, “I’m glad you arrived in time for breakfast. Michael and I will be leaving soon to help set up for the auction. You’re welcome to come, too, and give us a hand. Or just hang out at the festival. Or visit some of the sights in town. There’s plenty to see in Snowflake Valley. Isn’t there, Michael?”

Now his tone was edged with sarcasm. He was still mocking her hometown. And why did either of those things surprise her? They’d shared a few moments of closeness last night and again this morning. But when it came to their basic differences, nothing had changed.

She blinked to clear her suddenly blurry eyes and turned back to his brothers. She was only the housekeeper and cook, and she was going to act like it. “If you’ve brought bags with you and would like to get them from your car, I’ll take you upstairs to your rooms.”

The brothers showed their enthusiasm for her offer by the screech of chair legs on the floor and the stomp of boots across the kitchen. She reached for the empty dishes and rose from her seat.

Michael rested his hand on her arm. The warmth of his fingers nearly made her fumble one of the platters. His dark-eyed gaze, steady on her, made her feel even warmer.

“I apologize for Derek,” he said, “since he doesn’t have the manners to excuse himself.”

“What’s to excuse?” she asked flippantly. “What girl wouldn’t like being told she’s hot-looking?”

“Then I’ll tell you. You’re hot. You’re beautiful. And you’re—” He snapped his mouth shut and took his hand from her arm.

Barbara White Daille lives with her husband in the sunny Southwest. Though they love the warm winters and the lizards in their front yard, they haven’t gotten used to the scorpions in the bathroom. Barbara also loves writing, reading, and chocolate. Sign up for her newsletter to keep up with the latest in her writing life: https://barbarawhitedaille.com/newsletter.