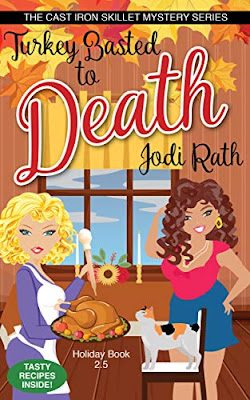 Thanksgiving is here, and Jolie Tucker has had quite the year! She is ready to sit back and relax with family and friends. But this is Leavensport, OH—so get ready for intense therapy sessions, dysfunctional family holiday gatherings, uninvited guests, and an inner-city teen advocate found DEAD—stabbed in the ear with the turkey baster!

Welcome to Leavensport, OH, where DEATH takes a DELICIOUS turn!

Hi Jodi. Welcome to Read Your Writes Book Reviews. How are you?
Hello, and thanks so much for having me. I’m doing fabulous and hope you and everyone out there in the blogosphere is doing wonderful too!

Thanks. Please tell me about your Cast Iron Skillet Mystery series.
This series is so much fun to write. It encompasses parts of myself, my friends, my family dysfunction, my community, my split-life between living in the inner city and in a country tiny village, and includes themes like urban sprawl, gentrification, always a mystery to solve, yummy food and recipes to make in cast iron, and a fun diverse cast of characters that are constantly striving to be better and communicate more effectively. They don’t always do great—they are human—but they never stop trying!

Sounds great. Congratulations on the release of Turkey Basted to Death. This is the first novella in your Cast Iron Skillet Mystery series. What can you tell me about it and is it a standalone read?

Turkey Basted to Death is the third book in the series. I try to create every book to be able to be a standalone read, but I believe they are better if the reader is invested in the series so they can see the growth of characters and relationships. Also, there are overarching themes that happen in the series—so there is an ongoing story throughout the series. This book is a holiday book showing how family dysfunction plays a part in the holiday season—how we all have that love/hate relationship with some in our family.

Tell me a little about the protagonist, Jolie Tucker, and some of the secondary characters in the series.
Jolie is now 24 years old. She is someone who has had trauma in her childhood that she is trying to overcome as a young adult. She has a love interest who is ten years older than she is—yet, she struggles with trust and relationships with men due to her past issues. She co-owns Cast Iron Creations with her best friend Ava Martinez and the recipes are taken from her family. Her family is always present in her life and she struggles with family dysfunction throughout the series—in a lot of comical ways. She’s grown up in the village of Leavensport, Ohio with a crew: Ava, Bradley, Delilah, Lydia, Betsy, Keith, and Toby. These lifelong friends/frenemies find themselves in trouble from time to time and while they may not always get along perfectly, they have a connection that binds them.

How did you go about creating your characters? Did you have any inspirations?
Jolie’s best friend, Ava, is a compilation of all my best girlfriends. A lot of Jolie is based off me—not everything—but a lot of her past and internal struggles comes from my life. Jolie’s family is based off of my family to a degree.

When you sit down to write your mysteries, do you already know who the killer is and why they did it, or are you just as surprised as the readers?
The first book I wrote, I had the killer planned out. The problem was I ended up loving the character so much that I couldn’t do it—this character is now a regular in the series. The second book I knew who the killer was before I began writing. For this third book, I knew who the killer was at the beginning—that person is still the killer BUT there was a HUGE twist that occurred in the middle of the book that I didn’t know was going to happen until I got there. This twist will affect things later in the series.

Very interesting. Last question. If Jolie was a real person and I could sit down and talk with her, what do you think she would say about you?
I think she has a love/hate relationship with me. BTW: is it weird she is 100% a real person to me? LOL. She exists because of me, and for that she is thankful. She gets the crap beat out of her regularly because of me too—so that is where she hates me.

Jodi, it is TOTALLY fine that Jolie is real to you. Characters are always real to me. Thank you so much for your time and for answering some questions for me.
Thanks so much for having me here today!

You can follow the Turkey Basted to Death Blog Tour here.