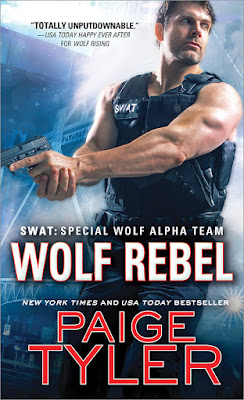 She let him get away
SWAT werewolf Rachel Bennett is hounded by nightmares after a vicious attack left her with PTSD. Not knowing who or what she can trust anymore, she’s relieved to be assigned to a high-profile protective detail. Diving into work might be the distraction she needs, until she notices the mysterious hunk who seems to follow her wherever she goes—and recognizes him.

Now he needs her help…
After he’s badly injured, former Navy SEAL Knox Lawson seeks out Rachel when he realizes he’s turning into a werewolf. He’d once been part of the group hunting her kind, but he knew he had to quit when he found Rachel in his crosshairs. Now he desperately needs her help.

Rachel isn’t sure she trusts Knox, but having him around keeps the nightmares—and the monster creating them—away. Knox might not know much about being a werewolf, but there’s no doubt he’ll do everything in his power to win her trust and keep her safe.

At this point in the SWAT: Special Wolf Alpha Team series, if you haven’t read all the books, it would be impossible to really get the entire experience. The books continue to get better and better. More importantly, Paige Tyler has added some very unexpected elements to the series that I didn’t see coming but can totally appreciate.

This time, the focus is on one of the newer SWAT team members, Rachel Bennett. She finds out that “The One” just so happens to be someone that is an enemy of the pack named Knox Lawson. He also saved her life. And up until recently, he hunted werewolves. Rachel’s past has been haunting her ever since she became a werewolf. The circumstances behind her transformation are a key focal point in this book and very intriguing. Knox has his own demons from when he was a Navy Seal. Together, they are very complementary to each other although no one will think that they should be. That’s what makes Wolf Rebel so good. Nothing is what it seems. The action really ramps up as Knox and Rachel end up working side by side to protect the DA and her family from some seriously bad guys. Having been along for the entire ride, I was able to easily follow the action and had a good idea of where everything was going except for a new twist that is thrown in. I won’t spoil it but just as in the last book, it brought more things into perspective.

At 10 books and counting, this Special Wolf Alpha Team series still has plenty left to offer. I have yet to be disappointed and continue to be impressed by Paige’s storytelling. Although werewolf tales are far from new, Paige keeps it fresh. I look forward to the next book in the series.

You can read an excerpt from Wolf Rebel here.