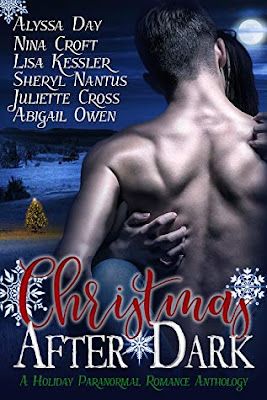 Cozy up and get lost in supernatural worlds of shifters, gods, Atlantans, werewolves, witches, and more... A holiday treat guaranteed to jingle your bells!

CHRISTMAS AFTER DARK is a boxed set anthology of novellas from six of the hottest paranormal romance authors out there.

Warning: Christmas After Dark contains alpha heroes, sassy heroines, sizzling connections, holiday traditions, wicked intentions, snow and mistletoe, heart-racing suspense, and a little something naughty (but not too naughty, because we don't want to bump you off the nice list). And it's our gift to you...


STORIES IN THIS ANTHOLOGY

Shifting Seasons by Sheryl Nantus:
Cassie Nyre is looking forward to a quiet and lonely Christmas—until she finds an injured animal on the way home. Her big heart has her bring the hurt otter into her home and into her bathtub, to rest until Christmas Day when she can deliver it to Animal Control. But the next morning she finds a semi-naked man in her bathroom—and it's not Santa Claus!


She blinked wildly, the ceiling coming into focus as her vision cleared.

I knocked myself out.

Cassie lay still for a second, assessing the situation. She didn't feel any pain, other than a throbbing on the side of her head, obviously from hitting the sink.

The ceiling was familiar—her living room. She'd stared at those cracks for hours over the years, lying down on the couch with a good book and glancing up every now and then to give her eyes a break.

So, she was still in her house. Except not on the bathroom floor.

"I'm sorry." The gentle, rumbling voice washed over her. "I didn't intend to startle you. You slipped on the floor, smacked your head on the sink. I brought you out here to the couch to recover."

Cassie turned her head slowly, following the voice back to her rocking chair—the one she'd vacated earlier. The fire was burning bright, flames leaping into the air from the stacked wood.

A man sat there, watching her.

Long, dark hair fell over his shoulders, long enough to be pulled into a ponytail if needed. His bare chest was visible through the gaps, toned abdominal muscles on full view. A blanket covered his lap, taken from the back of her couch.

She might have fainted, but she wasn't dead. A slow burn started inside her as she stared at the stranger, taking in the dark brown eyes, the gentle smile touching his lips.

If she was hallucinating, she had excellent taste.

Her gaze went to her phone, sitting on the table beside the mystery man. Barely out of reach…

"I think not." He tilted his head to one side, giving her a wistful shake. "I'm sorry, but I can't have you calling the police on me. Besides, on Christmas morning—likelier than not, they'll think you're drunk and ignore it."

"Can't blame me for trying," she said.

Her attention fell on his left leg, peeking out from under the blanket.

The cut wasn't deep, the pink skin standing out—showing the healing process was well underway. But it was in the exact same place where the otter had been injured.

She drew a deep breath, trying to collect her thoughts.

He looked down, following her stare. "Ah, yes. Thanks for your help—it would have healed anyway, but it was really nice to relax in your bathtub. A lot more comfortable than lying in the mud or floating in the water." He smacked his lips. "The tuna was lovely. Really helped boost my healing with the protein."

Cassie couldn't help studying his mouth as he spoke, still coming to terms with the obvious.

"You're an otter. And a man." She fought to find the words. "A shapeshifter, right?"

The phrase rolled around her mouth like marbles, turning her thoughts to cotton.

She pushed herself up into a sitting position, painfully aware of the insanity swirling around her. "How do you know my name?"

"I've seen you around over the years," he said. "You, your parents—anyone who walks by the river. You talk, I listen and learn." Alec smiled.

Cassie rubbed the back of her neck. "I see." She gave him a slight nod. "Thank you for taking care of me."

"My fault totally." He got up from the chair, letting the blanket fall. "I shouldn't have surprised you like that. I didn't even see the water on the floor—must have splashed some of it out of the tub when I changed. Glad it wasn't worse." He advanced on her, taking his time as he crossed the floor.

All the air left her lungs as she stared at him, the slip of what she assumed now to be otter pelt covering his groin.

It confirmed her previous assessment—Alec had a swimmer's body, toned and taut from head to toe.

The heat that had been simmering in her veins kicked up a thousand degrees. There was still a bit of a limp in his walk, showing the wound hadn't totally healed.

He paused, gesturing at the sofa. "May I sit down?"

"Sure." It seemed like the only thing to say.

"Thanks—if you don't mind, I'd like to check you over, make sure you're not dealing with a major concussion." He took hold of her face, thumbs brushing over her cheeks. Locking eyes with her, Alec nodded.

"Pupils look good—no difference between them. Any headache? Any pain?"

She reached back and touched the swollen knot at the side of her head, wincing. "Other than when I touch that, no."

"Glad to hear it." He studied her face. "I'm not a doctor, but if you feel nauseous, sing out, and we'll call 911." He followed her gaze down to her injured leg. "As you can see, I'm still not ready to go back in the water."

"No. No way. This has got to be some sort of prank." She looked around the living room. "Is this some stupid reality show? Got cameras hidden to broadcast how I freak out?"

His soft chuckle caressed her ears. "I'm sorry to say, no. I'm the real deal." He headed for the kitchen. "I'll make some toast and coffee, something light. Don't want to shock your system too much."

"A man in the kitchen is enough to do that," Cassie said with a chuckle as he moved out of sight.

🎄 You can read my review of Shifting Seasons here. 🎄

I’m giving away a copy of Christmas After Dark to one lucky winner.

Christmas in Atlantis by Alyssa Day:
Warrior-turned-pirate, Dare is the black sheep of all Atlantis, and black sheep and scoundrels can never deserve love. But it's the season of miracles in Atlantis. A chance to make wishes come true. And when Lyric, an artist who sees the world through song, tells her new Atlantean friends O Henry's story of The Gift of the Magi, the world—and Lyric and Dare—may never be the same.

Bewitched Before Christmas by Nina Croft:
Christmas is a time to spend with family, but Lola's don't seem to want her back. Instead, she's stuck in the wilds of Scotland under the protection of Lachlan MacNair, a blood-sucking monster, who's determined to make sure she has the sorriest Christmas ever. Things go from bad to much, much worse when Lola sees a vision of herself kissing Lachlan, under the mistletoe.  Lola is a powerful witch and her visions of the future always come true. Until now. Because this one... Never. Going. To. Happen.

The Lone Wolf's Wish by Lisa Kessler:
Shane Dodd has lost everything, his Pack, his home, and hope. His only wish this Christmas is to live long enough to exact revenge on the Nero assassin he believes killed his Pack. But when he steps between a bullet and Piper Holland everything changes. The woman dressed as one of Santa's elves is his mate, and she ignites a flame in his heart. But hope and love are dangerous wishes for a lone wolf.


🎄 You can read my review of The Lone Wolf’s Wish here. 🎄

Shifting Seasons by Sheryl Nantus:
Cassie Nyre is looking forward to a quiet and lonely Christmas—until she finds an injured animal on the way home. Her big heart has her bring the hurt otter into her home and into her bathtub, to rest until Christmas Day when she can deliver it to Animal Control. But the next morning she finds a semi-naked man in her bathroom—and it's not Santa Claus!

Bewitch You a Merry Christmas by Juliette Cross:
With a Christmas curse to break and a Karaoke party to plan, all Evie really wants is time with her werewolf boyfriend. Private time. All-night-in-his-arms time. But as hex-breaker of the Savoie Sisters coven, the most powerful in New Orleans, she needs to take care of business and family favors first. After that, Mateo Cruz and his broody, sexy self is all hers.

The Wolf I Want for Christmas by Abigail Owen:
Cade Campbell has spent ten years in hiding, preparing to return to his small town, the pack his uncle stole from him...and the mate who doesn't know she's been waiting for him. When he shows up on Shyla's doorstep a few days before Christmas he discovers the sweet, quiet girl he grew up with is all woman. The problem is she's become a loner, is obsessively neat, and allergic to dogs. Bad news for this wolf. Still, Cade's not giving up on her or on taking his rightful place as alpha. Maybe this year Santa could finally get things right.