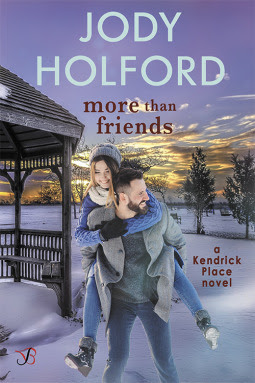 Owen Burnett planned on a quiet, easygoing Christmas, hanging out with his best friend and neighbor, Gabby Michaelson. So when his mom pressures him to come home for the holidays, he tells a little white lie…that he’s spending the holidays with his new girlfriend. But when his family shows up unexpectedly, Owen pulls the best friend card and asks Gabby to play his fake girlfriend.

Gabby’s been hopelessly in love with her best friend Owen for what feels like forever, but playing his "fake" girlfriend when the entire boisterous Burnett clan visits is easier said than done. The more she tries to deny the attraction between them, the more obvious their chemistry becomes. But even though she's not the only one feeling it, putting their friendship on the line is a risk she can’t take. 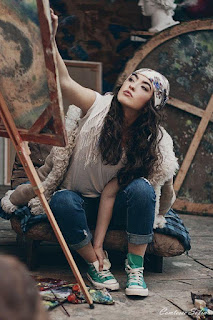 Physical Description:  About 5’2” & a ½, long, dark, wavy hair that often falls in my face despite tying it up. Brown eyes, curvy build. Clothing that is often paint spattered and mismatched.

Occupation:  By day, I work as a secretary at the university but during every free moment, I paint and draw. One day I plan to be a full time artist.

3 dislikes in no particular order:  Secrets, cherries, and getting out of bed early

Favorite dessert:  Ply me with chocolate

Favorite way to spend an evening:  Cuddled on the couch with Owen after a great session of painting. Cozy fire going while we watch our favorite shows and share popcorn.

If you could have a do-over, what would you do differently?  Maybe I wouldn’t hide my feelings for so long.

Is it possible to survive tragedy and find happiness again?  I’m living proof.

What’s something you’ve said you would never do, but in fact have done?  Tried calamari. If I don’t think about it being little squid, it’s yummy.

Most romantic gesture experienced:  Owen braving a crowd to tell me how much he loves me.

Words to live by:  "Whatever our souls are made of, his and mine are the same." -- Emily Brontë

“Hey,” he said, ignoring the warmth crowding his chest. He shut the door behind him and arched an eyebrow when she slapped the book shut and put it behind her back. No. His mother wouldn’t.

“Hi.” She scooted back on the bed, pushing the dark blue book, which he now recognized, under the pillow.

“Gabby. What are you doing? You were supposed to be sketching,” he said, advancing.

If it was possible to look down her nose at him while she looked up at him, she managed. “Is that what I was supposed to be doing? I didn’t know I had to confirm my activities with you.”

His legs hit the bed and Gabby’s body tensed, like she was ready to spring from the bed. With the book, most likely.

“Did my mother give you that?”

Her smile started slow then took over her entire face. Her eyes shone with it. She nodded.

“Oh no. It’s too good. There are actual bath shots, O. And the time you dressed up as your sister. And there’s one shot of you learning how to pee standing up,” she said. Her words came out slightly muffled as her hand shot to her mouth to cover the fit of laughter.

He launched himself at the album but she tugged it away just in time and he landed on top of her. The album went flying to the floor and Gabby laughed, twisting in his arms, trying to get away.

She nodded. “I really do. I think I’d like to do a new series. Owen. The younger years. From print to paint.” Gabby’s body convulsed in laughter. She struggled with him as he tickled her and tried to get her to promise never to do such a thing. It didn’t take long for her to cave.

“Say I swear on my favorite set of brushes to erase all memories of what I saw in Owen’s baby book,” he said, pinning her hands above her head.

She bit her lip, considering. “Owen, I will never, in my life, forget what I saw in those pictures. In fact, in times of trouble or sadness, I may purposely recall them,” she said.

You can read my More Than Friends interview with Jody here.