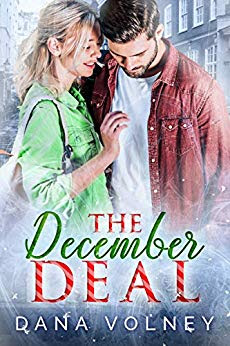 After her dad is diagnosed with an aggressive cancer, Lilia Carrigan returns home to Wyoming. The insurance company won’t cover the costs for an experimental trial that offers his best chance at surviving, and she needs a way to raise funds fast.

Vincent Morgenstern has had a year to fulfill the clause in his dad’s will that says if he doesn’t marry, he’ll lose out on inheriting the family business he loves so much. The deadline is New Year’s Eve, and he’s determined to get down the aisle, even if he has to pay the bride to be on his arm.

When Lilia overhears his predicament at a coffee shop, the crazy solution to both their problems seems obvious. What’s one year of faking it?

But as the holiday season works its magic, their platonic partnership threatens to get very personal. Will Lilia and Vincent’s December deal stay professional, or will real feelings ruin everything?

From the beginning, The December Deal by Dana Volney had me smiling. The premise of the story, being a guy hiring a girl to marry him for career advancement or to secure a position in the family company isn’t anything new. However, Dana has managed to put a little spin on this premise.

The characters of Lilia Carrigan and Vincent Morgenstern are both great. Lilia is adventurous, carefree, and spunky, but she would do absolutely anything to help out her dying father. Vincent is a true workaholic who doesn’t realize anything is missing in his life until Lilia barges her way into it.

A chance encounter results in Lilia suggesting they can each help the other out. Neither expects their one year contract to result in actual friendship, much less love, but fate has a different plan.

Dana Volney is a new author for me and I can’t wait to go back and read her other books, especially Holiday Hoopla and Christmas Clash that have crossover characters.

The Christmas in Wyoming Series: