Review ~ A CUP OF HOLIDAY FEAR by Ellie Alexander 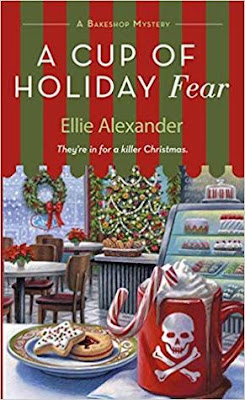 The latest installment in the Bakeshop Mysteries: Christmas comes to Ashland, OR—but all Jules wants is to catcher a killer.

Torte, Ashland’s favorite bakeshop is decking the halls and brewing up cups of holiday cheer. The Oregon Shakespeare Festival is dark for the season, but spirits are high as twinkle lights illuminate Main Street and snow falls softly on rooftops. Torte is bustling with activity. Jules and her team are rolling out dozens of Christmas tree cutouts and dusting them with sparkling green sugar. Helen’s signature Antoinettes, a delectable almond cookie filled with raspberry preserves and slathered with chocolate buttercream, are an instant hit. As are Andy’s peppermint bark mochas and eggnog shooters. While carolers serenade shoppers in the plaza, Jules packages up festive boxes of holiday sweets. She feels a bit like Santa Claus as she delivers glistening Christmas stolens, dainty tea cakes, and mincemeat pies.

To cap off the merry season, Jules and Helen host their annual staff party at the historic Winchester Inn’s Dickens Feast. The six-course dinner is a beloved tradition, complete with Yorkshire pudding and a Christmas goose. Santa, Mrs. Claus, and even a cheerless Ebenezer Scrooge delight dinner guests with jokes, friendly banter, and surprise gifts. As snow piles up outside the hot buttered rum and mulled wine keep everyone toasty inside. However, just as the dessert course is about to be served the power goes out. When the glow of warm light returns, the merriment evaporates. One of the guests is sprawled out in front of the twenty-foot Christmas tree. Suddenly Jules finds herself in the middle of a murder investigation. Her only wish this Christmas is to catch a killer.

I can't believe it’s taken ten books for Ellie Alexander to write a Christmas story for her Bakeshop Mystery series. I mean what's a better backdrop than the Torte Bakery in Ashland, Oregon?

A Cup of Holiday Fear finds Jules Capshaw and her Torte staff churning out holiday drinks, pastries, and desserts. In the midst of all the working, Jules, her staff, along with her mother Helen, stepfather Doug, and best friend Lance take a night off to celebrate Christmas, all Torte has accomplished during the year, and each other. The group attends the Dickens Feast held at the Winchester Inn. This event is a holiday tradition put on every day during the month of December. Jon and Emma Winchester have been putting on the event for going on thirty years now. The Winchesters are ready to retire but their only child, Nate doesn't want to take over the inn. The Winchesters make the tough decision to sell the inn to a lady named Cami from L.A. Rumors start to spread that Cami doesn't plan on keeping the inn open and that everyone there will lose their jobs. This will definitely be a night and an event to remember.

Off the bat, Jules and her guests can tell that Cami isn't a very nice person. Cami doesn't want to abide by the rules of the event and she doesn't want the items being served. Cami goes as far as yelling at one staff member and gets into an altercation with another. Not only is Cami making the event a little uncomfortable for everyone, but the Dickens Feast which usually runs like a well-oiled machine is running like a bunch of newbies are handling things. “Literally everything that could go wrong has.” Someone sabotages the electrical system, throwing the entire inn into darkness. When the lights finally come back on, Jules finds the body of Cami. Without question, Cami was murdered. But who did so and why can potentially send shockwaves through Ashland.

I love reading Ellie’s Bakeshop Mystery series. Every book is like meeting up with old friends. Every single character is someone I would love to know except for Richard Lord, the owner of the Merry Windsor Hotel. But let’s not talk about him. I really enjoyed A Cup of Holiday Fear but I think I enjoyed the story too much. I was so wrapped up in reading that I missed the fact that the case was solved. I had to go back and re-read some pages. Throughout this series, Jules has had to deal with her husband Carlos keeping a huge secret from her. The two now live apart with her living in Ashland and him living on a cruise ship as a chef. As far as their relationship goes, Ellie continues to play with my romance girl emotions. I feel as though Jules is partially in limbo and doesn't know what to do. I can't believe the story ended the way it did! I want more. I also can't believe a cozy mystery made me cry. I am so excited there's another book in this series. Fingers crossed that Jules's love life gets sorted out.