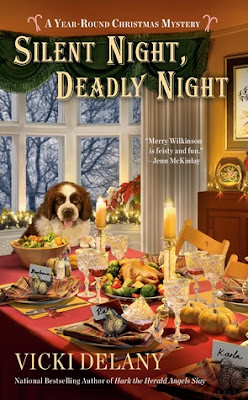 Residents of Rudolph keep the spirit of Christmas alive year-round—but their joy is threatened when a group of grinches visits the town, in the charming fourth installment of the Year-Round Christmas series.

It's the week before Thanksgiving, and Merry Wilkinson, owner of Mrs. Claus's Treasures, is preparing for a weekend reunion of her mother's college friends. But when the group of women comes into Merry's shop, Merry is met with frosty attitudes and cold hearts.

The women argue amongst themselves constantly, and the bickering only intensifies after one of the friends is poisoned. With her father's role as Santa in danger due to his proximity to the crime, Merry will need to use all of her investigative gifts to wrap this mystery up and save Santa and her favorite holiday.

It’s the week before Thanksgiving and Merry Wilkinson’s mother Aline has invited her college friends to visit Rudolph, New York for a weekend. The get together is supposed to be a celebration of them all meeting and becoming friends forty years ago. In order to maximize the time the women have together, Aline has invited them to all to stay at her home. The six women could not be more different. “I must have forgotten that.” Indeed you have Mrs. Wilkinson. The women constantly try to one-up each other or put each other down. “Your friends aren’t nice.” No, they are not. But nothing could have prepared Merry or her mother for one of the women to die.

When it is quickly determined that the death was murder, the question becomes who killed the victim and why? “Secrets. Secrets. We all have secrets. Don’t we? Some new, some old. Some serious, some not so. What do we do to protect our secrets? How far would we go? Secrets, are at the heart of any murder. Uncover the secret, and you’ve found the killer.”

As Merry splits her time between working at her Christmas shop Mrs. Claus’s Treasurers and running interference between her mother and her “friends”, she’s attempting to help the police by finding out all she can about the victim and the other ladies. It seems a majority of the women are not who they seem or pretend to be. Could one of these so-called once friends be a murderer, or is the culprit someone closer to the victim?

Vicki Delany has written an incredible mystery! I was completely in the dark until the very end. One thing I loved was that Vicki wrote a story that I wasn’t in a rush to finish. Her writing allowed me to just sit back and enjoy the words on the page and where they took me. I was definitely surprised when the big reveal came. I have to admit that the introduction of the five friends made it very difficult to keep everyone straight. My biggest complaint about this story and now the series is Jackie. She’s Merry’s employee who has from the beginning of the series been irritating. It seems she’s only getting worse. Her narcissism is off the charts. Why Merry doesn’t make her life better and alleviate my reader irritation and fire Jackie is beyond me. Putting my feelings for one Jackie O’Reilly aside, I really hope there are more books in this series to come.

The A Year-Round Christmas Series: