Review ~ WRAPPED UP IN YOU by Kate Meader 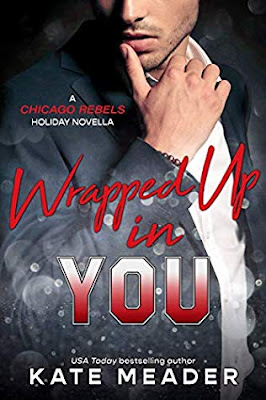 Get wrapped up in a Rebel this holiday season ...

The holidays are coming and hockey player, Cade “Alamo” Burnett knows exactly what he wants for Christmas: an assurance that his happily-ever-after with Chicago Rebels general manager, Dante Moretti, stays that way. But festive gremlins are conspiring to throw a wrench in the forever Cade and Dante fought so hard for. With their personal and professional lives clashing, can they find their way back to each other — or are they destined to find only coal in their stockings come Christmas morning?

This holiday novella continues the story begun in Undone by You and contains spoilers for all the Chicago Rebels novels. Fans of the series will love this check-in with a favorite couple as well as other Rebels, old and new! Includes a sneak peek of Instacrush, the next Rookie Rebels novel.

Readers were first introduced to Dante Moretti and Cade Burnett as a couple in Undone by You, where the two fought hard to overcome criticism and prejudice to be together. It has now been three years and the two are still going strong both professionally and personally. Wrapped Up in You finds the love between Cade and Dante being tested.

Dante is the General Manager of the Chicago Rebels hockey team. Cade is one of the team’s defensemen. Dante’s contract is up for renewal and Cade through his best friend and co-owner of the team, Violet Vasquez St. James has learned that the team is talking about possibly trading Cade out of Chicago. While Cade understands hockey is a business and nothing is guaranteed, he can’t help but be nervous about what the future holds for him and Dante.

Wrapped Up in You starts on Thanksgiving Day with Cade and Dante traveling to New York to spend Thanksgiving with Dante’s sisters and their families. Instead of giving thanks and having a joyous day, the Moretti family ends up spending it in the hospital. What starts out as a tragedy turns out to be the catalyst Dante and Cade need to solidify their relationship.

Cade and Dante are one of my favorite couples. There isn’t anything about them I don’t love. Kate Meader is one of my favorite authors because she writes amazing characters and always manages to allow me to escape into the pages of her books. While Wrapped Up in You is a standalone read, I think you would really appreciate and love this novella more if you read Undone by You first. That's the true love story of Dante and Cade.