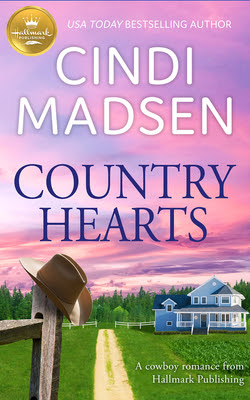 She shouldn't get involved with the cowboy next door...

Laid off from her teaching job in the city, Jemma Monroe takes a job teaching in a tiny town and rents a house on the outskirts. A visitor soon shows up at her door—a horse. His owner, a handsome neighbor in boots and a cowboy hat, comes by to collect him.

When single dad Wyatt Langford meets Jemma, it’s the first time he feels interest in a woman since his wife left. But she’s his daughter’s new teacher, so they both know they should keep their distance.

Nonetheless, Wyatt keeps finding excuses to spend time with Jemma, and Wyatt’s daughter becomes more and more attached to her. With them, Jemma discovers the good things about country life, from starry skies to s’mores cooked over a fire. But she still misses her past life in the city. Is there any reason for them to dream of a future together?

For the past three years, Jemma Monroe has been teaching at a school where she thought she had a future, both personally and professionally. Due to budget cuts, she’s been laid off from her teaching job. And it turns out her “boyfriend” was really just a friend, hanging out with her. With all of this happening in the middle of the school year, she's lucky she's able to find another teaching position. Too bad the position isn't in Denver but in the small farming/rural community of Haven Lake. Jemma keeps telling herself that she needs an adventure, and an adventure is definitely what she’s in store for. This city girl is about to get a crash course in country living from a visiting horse, a snake falling out of the ceiling, driving on unplowed snow-covered roads, and the sexiest cowboy she’s ever seen.

Wyatt Langford was living his dream, running his family farm, being married and having a little girl. His dream turned into a nightmare when his wife decided she didn't like small-town farm life or being a parent. When she left, Wyatt not only had to pick up the pieces of his shattered heart, but also that of his daughter as well. Wyatt since vowed that his farm and daughter were all he needed. Wyatt's carefully constructed life starts to spiral out of control again when the temporary 3rd-grade teacher moves in next door. Jemma turns his life upside down and makes him laugh and be more social. But he's afraid a city girl would never truly love and want to stay in a small spec of a town like Haven Lake.

Jemma and Wyatt are both characters who were easy to relate to and understand. Bailey Rae, Wyatt’s eight-year-old daughter was a charming little spitfire. She’s smart and funny. She definitely knew how to keep Wyatt on his toes. More importantly, she sees and understands more than people think she does. “Sometimes I worry that he gets lonely.” Bailey Rae wants to have a complete family with two parents. “More than anything in the world, I want to play Cupid.” When Bailey Rae gets her chance she goes all out and the town of Haven Lake is there to help when needed.

I like reading small-town romances because generally the people are nice and welcoming. What I don't like at times, is the meddling in people's lives or sticking their nose in people's business. I hate that they think they know what's best for someone. I mean let’s be honest, if the shoe was on the other foot, they wouldn’t appreciate someone saying they needed to move on and have a girlfriend or wife. But that’s just want they did to Wyatt.

Country Hearts was an enjoyable book. I think I spent most of the time reading it trying to picture it as a Hallmark movie. I loved that Cindi Madsen made this book truly personal by using the names of family members. This book will definitely make you laugh and leave a smile on your face.

Cindi Madsen is a USA Today bestselling author of contemporary romance and young adult novels. She sits at her computer every chance she gets, plotting, revising, and falling in love with her characters. Sometimes it makes her a crazy person. Without it, she'd be even crazier. She has way too many shoes, but can always find a reason to buy a pretty new pair, especially if they're sparkly, colorful, or super tall. She loves music and dancing and wishes summer lasted all year long. She lives in Colorado (where summer is most definitely NOT all year long) with her husband, three children, an overly-dramatic tomcat, & an adorable one-eyed kitty named Agent Fury.