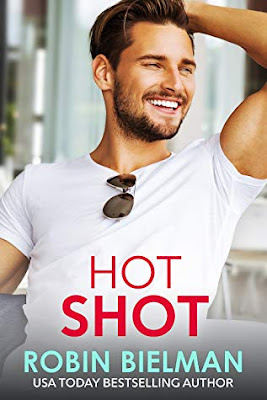 He believes in fate…

Here’s my plan: Crash through the ceiling of my family’s business to become the best hotelier on the West Coast. Nothing rattles me when it comes to a challenge and hard work, but when I spot my almost one-night-stand in my lobby, I’m thrown totally off my game. Alejandra is my dream girl. The one I can’t forget who got away – literally. Which might explain why I blurt out to my meddlesome, matchmaking grandmother that Alejandra is my date for her fast approaching and highly choreographed eightieth birthday party.

She’s been on pause…

Some decisions are harder than others, but agreeing to a date with Drew isn’t one of them. He’s a charming and gorgeous curveball I didn’t see coming, but the more time we spend together, the harder it is to remember to play it safe. I’ve made a promise, and even though I’m now torn: I have to honor it in order to move on from the past. Drew feels like my future, but I’m about to put everything I want in jeopardy.

Robin Bielman is one of my favorite authors. I know she's going to make me fall head over heels in love with her hero and heroine. I knew from reading the previous books in the American Royalty series that I would love Drew. I just didn't know how much.

Drew Auprince is known as American royalty. His family is known for running extremely successful hotels nationally and abroad. Of the three Auprince brothers, Drew is the only one to go into the family business. But instead of just working for his father, Drew had built and opened his own hotel called The Surfeit.

Alejandra Cruz is the activities director for the Davis Senior Community Center. At 25, she seems to fit in and relate to the over 70 crowd better than those her own age. Alejandra is often referred to as “goody-two-shoes” by her twin sister because she always walks the line and never takes risks. Alejandra has recently been dumped by her boyfriend of 7 years so that he can travel out of the country for a year and test to see if they should be together. The two agree that they will meet up immediately upon his return and see if the sparks of attraction are still there. If they are, the two will get back together. Alejandra intends to spend the next year being faithful to Matthew, even while she’s sure that he will be seeing other people.

Alejandra's commitment is put to the test when she meets Drew for the first time at a bar. Immediately, there is an attraction between the two, but when Drew steps away to answer a phone call, he returns to find Alejandra gone. Flash forward nine months and fate has brought these two back together. Drew has no intention of letting Alejandra get away this time. He even tells his matchmaking grandmother, Rosemary, that they are a couple and plan on attending her birthday celebration together. When the house she shares with her sister gets flooded, Drew insists that Alejandra stays with him until repairs are made. This is just the time the two need to get to know one another and fall in love.

A lot of things happen within the pages of Hot Shot. I can assure you that it's all good. The relationship between these two was easy and steady from the very beginning. They had arguments that were smoothed over fairly quickly. It's like they were almost on the same page the whole time. I didn't find their dark moment to be really that dark. This part of the story was pretty much predictable.

Robin did an incredible job of ending Hot Shot and the American Royalty series. Seriously, it was amazing and unexpected. Hot Shot will truly leave a smile on your face. This is a true standalone read, but if you haven’t read the previous two books, Heartthrob and Sweet Talker, just know that the ending spoils the previous books.

“When I see something I want, I go after it.”

“A woman worth having is one who knows her worth and isn’t easily swayed by a handsome face.”

“Fear is something we invent and so I refuse to let it exist.”

“Jump in with both feet.”

“YOLO. You only live once.”

“You care with your whole heart and that’s admirable.”

“A promise is a promise.”