Review ~ A Weekend with Her Fake Fiancé by Traci Douglass 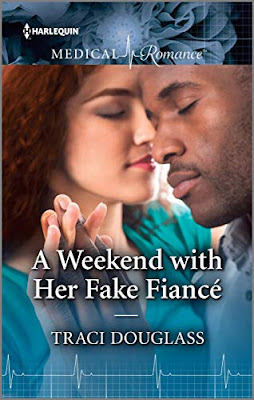 Could her temporary fiancé…

…become her husband for life?

To secure the job of her dreams, midwife Carmen Sanchez needs a fiancé, and fast! Paramedic Zac Taylor should be the last man she asks—there’s nothing fake about the attraction between them! Yet while lone wolf Zac might not be interested in forever, he pulls out all the stops to play fiancé of the year—and their make-believe engagement starts to feel all too real…

A Weekend with Her Fake Fiancé combines my favorite troupe of friends-to-lovers with fake engagement. The result is an up all night page-turner.

Carmen Sanchez is a nurse-midwife of Argentinian and Trinidadian descent. Growing up poor in Trinidad, Carmen has made it her mission to take care of her mother and younger sister. The three now live in a small house Carmen purchased in Anchorage, Alaska. Carmen's mother is in the early stages of dementia and sometimes forgets where she is. Carmen’s sister Clara is a high school senior and wants to become a nurse. It is Carmen’s goal to take care of all of them, and that requires money. Carmen has been interviewing for her dream job in Big Sur, California. The additional money would allow her to put her mother in a good facility and pay for her sister's education. The company is family-oriented and Carmen has told them that she's engaged, thinking that will help her chances. There's just one catch. Carmen isn't engaged. She doesn't even have a boyfriend. In fact, she isn't seeing anyone. Enter Zac Taylor.

Zac is an African-American paramedic for Anchorage Mercy Hospital. He's a man known to not be into relationships or anything serious. All of his adult life this has been the case and it's worked for him. But things changed for him the night of the hospital’s holiday staff party. That night, after a lot of drinks he and Carmen acted on their mutual attraction. The result was a night he has replayed a thousand times and cannot forget. When Carmen asks him to pretend to be her fiancé for the weekend he's a little shocked. His shock is intensified when he learns the conference he and Carmen are supposed to attend is being held at The Arctic Star Resort. Zac will do anything for Carmen. If that means he has to return to the resort where he grew up and possibly face his parents after 12 years then so be it.

A Weekend with Her Fake Fiancé was one of those stories that immediately captured my attention. I was pleasantly surprised by the diverse characters. Carmen and Zac are both intriguing. If I'm being honest, there was a point when Carmen rubbed me the wrong way. I mean she was asking Zac to do her a favor, but at the same time, she was being rude to him. My heart went out to Zac for the reason he hasn't seen his parents in over a decade. I loved that Traci Douglass put in a couple of twists that I found to be surprising. The story was big on character development and having both Carmen and Zac do a little self-reflection. Forgiveness also played a big role in this book.

It should be noted that while A Weekend with Her Fake Fiancé is the third book in the Anchorage Mercy Hospital series, it is a true standalone read. I know the story just came out, but I cannot wait to return to Anchorage Mercy again.

📖 You can read an excerpt of A Weekend with Her Fake Fiancé here. 📖 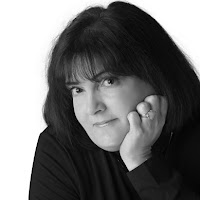 Traci Douglass is a USA Today Bestselling Author whose stories feature sizzling heroes with humor, quick wits and troubled pasts and heroines who are smart, tenacious, and always give as good as they get. She holds an MFA in Writing Popular Fiction from Seton Hill University and she loves cute animals, chocolate, coffee, hot UK actors, and sarcasm—not necessarily in that order.

Her books are published with Harlequin/Mills & Boon, Entangled Publishing, and Tule Publishing.