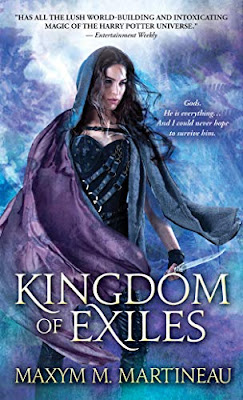 Assassin’s Creed meets Fantastic Beasts and Where to Find Them in this gripping, epic fantasy romance trilogy.

My heart wasn’t part of the deal when I bargained for my life,
But assassins so rarely keep their word.

Exiled Charmer Leena Edenfrell is running out of time. Empty pockets forced her to sell her beloved magical beasts—an offense punishable by death—and now there’s a price on her head. With the realm’s most talented murderer-for-hire nipping at her heels, Leena makes Noc an offer he can’t refuse: powerful mythical creatures in exchange for her life.

Plagued by a curse that kills everyone he loves, Noc agrees to Leena’s terms in hopes of finding a cure. Never mind that the dark magic binding the assassin’s oath will eventually force him to choose between Leena’s continued survival…and his own.

Maxym M. Martineau’s Kingdom of Exiles is simply amazing. I'm not giving the book the highest rating of 5 stars because I personally lack knowledge of Assassin's Creed, but have seen Fantastic Beasts and Where to Find Them. With Maxym, in essence, combining the two together you had to be able to visualize everything. Having previously seen Fantastic Beasts definitely help me to visualize the unique creatures within the book. I was able to visualize the assassins and what they did, but I think having a knowledge of Assassin's Creed would have made everything better and clearer.

Kingdom of Exiles was one of those books that had my attention immediately. I was intrigued by the exiled charmer Leena, whom I viewed as strong and courageous. I was equally captivated by Noc and his band of assassins. I loved the mystery aspect of the book. I was surprised that I grew attached to the assassins, who have such loyalty to Noc and each other. This book brought out emotions I wasn’t expecting.

Kingdom of Exiles was a great start to the Beast Charmer series. I can’t wait to find out what Maxym has in store for readers next.

📖 You can read an excerpt from Kingdom of Exiles here. 📖

Maxym M. Martineau is a staff writer and editor by day, and a fantasy romance author by night. When she’s not getting heated over broken hearts, she enjoys playing video games, sipping a well-made margarita, binge-watching television shows, competing in just about any sport, and of course, reading.