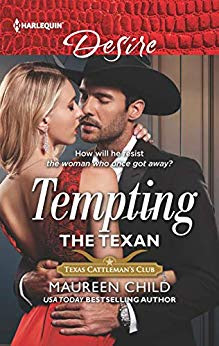 In the fight for his family’s legacy,
will this former flame consume him?

Rancher Kellan Blackwood is poised to fight the gold-digging stepmother who inherited his father’s empire. He doesn’t expect Irina Romanov, his father’s former maid—and Kellan’s long-ago lover—to block his way. Though Irina may hold secrets about his father’s motives, Kellan must keep his hands off. For the twice-tempted, secret lovers who once set Texas ablaze, that’s easier said than done.

First and foremost, Tempting the Texan needs to have a trigger warning and come with a number for people to seek help if they are being abused. Whether small or insignificant to some make no mistake, there is abuse in this book and not just in the past. Yes, I know this is a romance book and read as a form of escape from the world, that's all the more reason to want to help those who might be going through the same thing.

I'm going to go out on a limb and say that one must read Tempting the Texan. Not only is the writing good, but the whole series relies on this story. I've read the series out of order reading the second book, Rich, Rugged Rancher, first and had to go back and read this one and any questions that I had were answered by this book. The Texas Cattleman’s Club: Inheritance series is about the Blackwood siblings fighting to reclaim what they view as their rightful inheritance from their 36-year-old wicked ex-stepmother, Miranda Dupree, after their 62-year-old father Buck passes away and leaves his entire billion-dollar fortune to her. However, things aren't that simple. Buck wasn't an easy man to get along with when he was alive and in death, it appears he's going to have the last word.

Tempting the Texan is the second chance love story of Irina Romanov and eldest son Kellan Blackwood. Irina was Buck's maid and seven years ago she and Kellan shared a passion-filled week at Blackwood Hollow, Buck’s vast estate. Haunted by memories of the past, Kellan left Texas and Irina behind. Kellan ended up in Nashville where he made a name for himself and built a massive real estate empire. With the help of Buck, Irina picked up the pieces of her broken heart and reinvented herself.

Kellan is spitting mad that Buck left his and his sibling's inheritance to gold-digging Miranda and plans to do something about it. He just never expects to come face-to-face with Irina the woman who’s haunted his dreams and whom he's avoided for seven years. It's immediately evident that the passion these two shared all those years ago still burns hot. They both know that they should stay away from each other but are helpless to do so. Ultimately, they pick up where they left off, but differences of opinion, misunderstandings, and secrets threaten to destroy the love that could save them both.

In Tempting the Texan, we are introduced to three of Buck’s four children, his ex-wife Miranda, and get a glimpse of the man he was. I don’t know what’s in store for this series, but I do know that secrets are big, passions will burn hot, and nothing is what it seems. The Texas Cattleman's Club Inheritance series is off to a fantastic start. I can’t wait to read the other books.

“You’ll know everything eventually. Wait for it.”

From Boardroom to Bedroom by Jules Bennett releases February 1, 2020