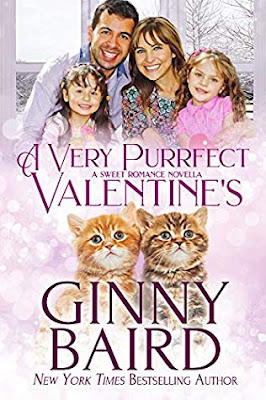 Single dad and successful builder Alex Peña promises his daughter, Vicki, a rescue kitten for her February 1st birthday. But, when they arrive at the shelter, little Vicki begs to keep two! There are only two kittens left in a litter, and Alex’s heart goes out to the small pair. When he agrees to let Vicki adopt both cats, Alex has no clue that a certain single mom and her child have already set their sights on the same tiny tabbies.

Melanie Brooks spends her days as an accomplished interior designer. Off the clock, she’s a caring, yet sometimes frazzled, single mom to six-year-old Lisa. When Lisa asks for a brother-and-sister kitten duo for her birthday, Melanie caves, never guessing that their adoption paperwork will get lost—with the kittens going to another family…

Alex, who is all about compromise, is convinced there’s a way to make this work. Melanie, who doesn’t do messy situations, is not so sure. Once the kitty-matchmaking-mischief begins, will Melanie and Alex be able to resist falling for each other? Or, will this turn out to be a very purrfect Valentine’s for all?

Alex was drinking his morning coffee when he saw Melanie springing through the back gate wearing an open overcoat on top of some sweatpants and a sweater, with sturdy duck boots on her feet. Snow streaked down from the gloomy sky as she traipsed after…wait a minute… Sugar?

The kitten darted toward some hedges at the side of the yard, and Alex dashed for his parka. All he and Melanie needed was for one of the kittens to become lost in this blizzard.

“What’s happening?” Vicki asked with a worried frown. She held Spice in her arms, cradling him like a baby. The orange cat was very compliant and didn’t seem to mind.

“Hang on to Spice and don’t let him go,” he instructed.

He zipped up his parka and hurried outside, meeting Melanie halfway through his backyard.

Alex spotted a flick of tail beneath a hedge. “There she is!”

He cautiously stepped toward the kitten, his boots crunching the snow as he went. He didn’t want to startle Sugar into squeezing between the fence boards and sprinting toward the street. “Here, Sugar,” he cooed. “Here, kitty-kitty.”

The tip of her tail disappeared and she turned to face him with curious cat eyes.

Alex reached out a hand, squatting toward the frozen ground.

The kitten crept forward, craning her neck toward his fingers.

“I’m not going to hurt you,” he said in low tones. “Just want to get you inside where it’s warm.” He shifted toward her ever so slowly. Then—aha! His hand made contact.

In a flash, he scooped the small animal into his hands.

Sugar trembled in his hold, blinking up at him. “You poor thing,” he told her, walking over to Melanie.

“Oh, thank goodness.” Alex passed her the kitten, and she tucked the miserable creature under the folds of her coat. “Thank you.”

He hadn’t even realized how close they stood until now. Melanie’s breath clouded the chilly air, its warmth nearly gracing his chin. It occurred to him then that Melanie was more than pretty. She was a beautiful woman. Stunning, standing there in the snow. And the way she looked at him made his heart beat harder. It was almost like she was wondering… wondering if he felt this, too. This unspoken tug between them.

“Well, I… I’d better get Sugar back inside.”

The winds picked up, swirling snowflakes around them, yet neither one moved.

Then, Melanie peered toward his house and said, “The girls.”

Alex looked over his shoulder to see Vicki watching them from his dining room window. Far across the fence, a small figure stood in the bay window at Melanie’s house, and he knew that Lisa was waiting, too.

She took a giant step backward and then another, leaving footprints in the snow. “Lisa was hoping Vicki could play again today. Seeing as how there’s no school, and all.”

“Why don’t you let Lisa come to our house?" he offered. "Vicki would like that. Besides. It’s our turn.”

“Okay. You’re on.” Suddenly his coat felt way too warm. “What time?”

“Purrfect,” she said, and he chuckled.

“Love that.” Alex grinned, thinking he could get used to this. Or maybe, to her. Uh-oh. He warned himself not to go there. But something in his soul said it was already too late.

Romance writer Ginny Baird has published novels in print and online and received screenplay options from Hollywood for her family and romantic comedy scripts. Whether writing light hearted romantic comedy or spine-tingling romantic suspense, she delights in delivering heartwarming stories.

She is a New York Times and USA Today bestselling author, a Top 10 Best Seller on Kindle, NOOK and iBooks, and a #1 Best Seller in several Romance and Women's Fiction categories. When she's not writing, Ginny enjoys cooking, biking and spending time with her family in Virginia. Ginny loves hearing from her readers! She invites you to visit her website and connect with her on social media. http://www.ginnybairdromance.com/