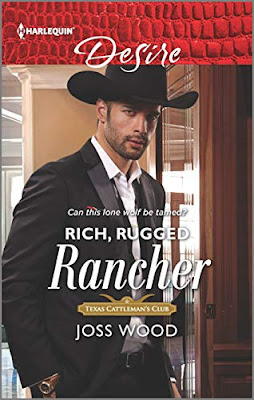 “Why aren’t you pushing me away?”

Ever since the accident that took his leg, oil tycoon Clint Rockwell doesn’t do relationships—he likes being alone. And he doesn’t need anyone’s pity. Then fast-talking reality star Fee Martinez sweeps into Royal, Texas, on to his ranch…and into his bed. It’s only for a night, and then two. Wanting more is impossible, but this goodbye might be the hardest thing he’s ever done…

Written by Joss Wood, Rich, Rugged Rancher is the second book in the Texas Cattleman's Club: Inheritance series. I didn't read the first book, Tempting the Texan by Maureen Child, and thus I feel as though I'm missing something as to the overall series plot. What I gather is that when Buck Blackwood died, he left everything he owned to his much younger (about his children's age) ex-wife and didn't leave anything to his three adult children who weren’t close to their father. I've also learned that there's an illegitimate son no one has met and they're trying to locate. It seems that Buck’s will stipulates that Miranda Blackwood the ex-wife, has to live on and spend her nights at the Blackwood Hollow Ranch. With this being the case, Miranda who stars in the reality TV show Secret Lives of NYC Ex-Wives brings the cast and crew to the ranch to continue their shooting schedule.

Seraphina “Fee” Martinez is a cast member on the show. She's an only child who never put down roots due to her father being in the military and moving around every year or so. Fee likes to take it upon herself to fix problems and people. When she crashes into Clint Rockwell’s classic Chevy pickup truck she doesn't offer up an apology. In fact, when the grumpy rancher is stubborn and rude, she gives it back to him. It seems she has found a new project. “Fixing him might make you feel better but it’s not about you, it’s about him.”  We'll see about that.

Fee and Clint bump heads often. “God, he’s hot but he’s so annoying.” There is no denying the sizzling attraction between them. Fee is surprised to learn that Clint is a local military hero. When she learns Clint lost his leg and single-handedly kept his unit safe after their chopper went down, she's even more intrigued. Clint may be interested in getting Fee between his sheets, but he's learned from experience that his disability is too much for people to handle. When their attraction reaches a boiling point, they give into their desires only to find they underestimated each other. Fee isn’t the shallow “I don't want to get my hands dirty” type and Clint is more sensitive and vulnerable than he lets on.

After dusting away the surface layer of Fee Martinez, I LOVED her. When she isn't playing it up for the cameras, Fee is genuine and has an incredible heart. She likes to help and be needed. She doesn’t take any junk and more importantly she calls Clint out when someone needs to. Clint has never met anyone like Fee. She's just what he needs, but doesn't think he deserves. “They were all the opposites--sun and moon, light and dark, city and country.”

“If I start something, I always finish it.”

“He was such a protector, such an alpha male. God, she adored him.”

“You are whole, and you’re better than normal--you’re extraordinary.”

“I’m a strong woman. I need a man who’s equally aware of his strength.”

“Sometimes you do fail, that’s life. But you have to give it your best shot.”


**Received a copy of the book from the author and voluntarily reviewed.**

📖 You can read my review of Tempting the Texan by Maureen Child here. 📖

From Boardroom to Bedroom by Jules Bennett releases February 1, 2020

Joss Wood’s passion for putting black letters on a white screen is only matched by her love of books and traveling (especially to the wild places of Southern Africa) and, possibly, by her hatred of ironing and making school lunches.

She’s a wife, a mom to two teenagers and slave to two cats. After a career in local economic development, she now writes full time.