Review ~ BLAME IT ON THE BILLIONAIRE by Naima Simone 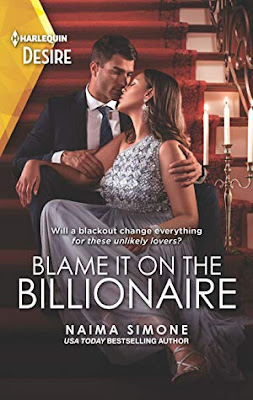 She fell into his arms... now she’s falling for his trap.
Will a blackout change everything for these unlikely lovers?

It was a night filled with secrets, lies…and soul-stealing passion. And now the blackout that turned lowly executive assistant Nadia Jordan and start-up billionaire Grayson Chandler into insatiable lovers leads to a proposal Nadia can’t refuse. As she steps into Grayson’s privileged Chicago world, will his matchmaking mother and vengeful ex destroy her dreams? Or will her fake fiancé make those dreams a reality?

I am a huge Naima Simone fan. With her stories, she has the ability to transport you to places you can only dream of, with characters who have a realness to them. Blame it on the Billionaire is the third and final book in the Blackout Billionaire series. The premise of the series is that three billionaires unexpectantly find the love of their lives during a citywide blackout while being locked in a heavily secured mansion. Having read all three books, I can say that all three heroes are completely different. However, they all have their immense wealth, family loyalty, and battered souls in common. The heroines are all sassy and determined. None of the six are expecting to meet anyone and fall in love.

While I haven't read all of Naima’s books, I find that Grayson Chandler is the most beast-like hero I've read from her. Grayson is the 30-year-old president of KayCee Corp. A company he and Gideon Knight (Black Tie Billionaire) founded together. Grayson is a man who has had to build a protective shield around himself, but inside he's a little boy who's hurting. Grayson is the third child of one of Chicago's wealthiest families. He's a “spare” so to speak. Having heterochromia (multi-colored eyes) he wasn't viewed as handsome or worthy by his parents or those around him. The Chandlers chose to lavish all of their praise and attention on their firstborn child, Jason, whom they planned to one day run Chandler International. When Jason suddenly dies, Grayson's parents look to him to take over the company, not caring that he is building his own legacy with KayCee Corp. They even feel that it is a foregone conclusion that Grayson will marry his ex-fiancee and merge two mega conglomerates together. After all, going back generations, a Chandler has always been CEO of the family company. And marriage isn’t about love, but about an understanding and what can be gained from each other.

Nadia Jordan is a strong heroine. I love that she knows who she is and isn't ashamed of where she's from or what she’s done to survive. She has a lot of pride and determination. As Grayson says, she's a true survivor. In her quest to give her younger brother Ezra a better life, she packed up and moved them from their small rural hometown in Georgia to Chicago. For a year, she has worked as an executive assistant to the VP of operations at KayCee Corp. On the night of the blackout, she finds herself using her personal time to bring her boss an extra dress shirt. Before the lights go out, Nadia bumps into Grayson. While she knows who he is, Grayson has no idea who Nadia is or that she works for his company. When the lights go out, the two find comfort in each other. Nadia knows it's wrong, but she wants to do something just for herself. She's thinking that come Monday morning she will continue to avoid the man she has secretly been crushing on for a year. Too bad that's not what happens. Grayson finds himself in his mother's crosshairs and tells her that Nadia is his girlfriend. Now he has to convince Nadia to go along with him. To his surprise, she refuses the quarter of a million dollars he offers her to pretend to be his fiancee. However, when Ezra is accepted into an Ivy League school that they can't afford, she changes her mind.

What starts out as a business arrangement turns into more when Grayson and Nadia realize they can't keep their hands off each other. Their physical attraction isn't the only thing that grows between them. The two start to really care about each other, sharing their hopes and dreams. Nadia has a titanium backbone and the strength of a lioness, but she gets pushed to her limits when dealing with Grayson's parents and his ex. Speaking of which, Naima is so freaking good at writing characters you HATE and wish would get swallowed up by the Earth's core.

When the chips are down and Grayson realizes he can’t live without Nadia, he finally makes the tough decisions we as readers wish he would have made earlier on. Grayson and Nadia truly had to fight themselves, their pasts, and other people to be able to be free to love themselves and each other. Their love affair was deep, passionate, and affirming. They truly are what each other needed in a partner.

**Received a copy from the publisher and voluntarily reviewed it.** 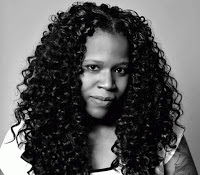