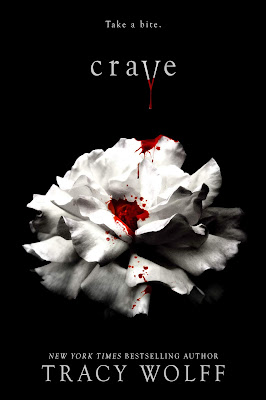 My whole world changed when I stepped inside the academy. Nothing is right about this place or the other students in it. Here I am, a mere mortal among gods…or monsters. I still can’t decide which of these warring factions I belong to, if I belong at all. I only know the one thing that unites them is their hatred of me.

Then there’s Jaxon Vega. A vampire with deadly secrets who hasn’t felt anything for a hundred years. But there’s something about him that calls to me, something broken in him that somehow fits with what’s broken in me.

Which could spell death for us all.

Because Jaxon walled himself off for a reason. And now someone wants to wake a sleeping monster, and I’m wondering if I was brought here intentionally—as the bait.

People read book reviews in order to decide if they want to read a book or not. Let me help you out. DO NOT read any reviews for Crave! Just buy the book!! Why do I say this? Crave is an amazing story that will have you glued to the pages. My fear is that some reviews will include spoilers that will ruin the reading experience. For me, not having any idea about what was going to happen made the book so much better and heightened my reading enjoyment.

At first glance, when you look at the cover of Crave, you immediately think about that other vampire book, Twilight. Outside of the cover, the fact that there's a vampire or ten and an epic love story, these books have nothing in common.

“Are you ready for an adventure?”

Seventeen-year-old Grace Foster has just had her whole world turned upside down with the death of both of her parents. A Southern California girl, Grace now finds herself trading in her shorts and flip-flops for six layers of clothing and a parka to live with her uncle Finn and cousin Macy in Healy, Alaska.

Finn is the headmaster at Katmere Academy, a boarding school in the middle of nowhere. When Grace arrives, she knows things are going to be different, she just has no idea how different things are going to be. Everyone is staring at her. Some kids seem friendly and some seem to detest her on-site. Everyone seems to be in a clique and none of the cliques seem to interact with the others. Then there's Flint Montgomery and Jaxon Vega, two guys who could not be more different. Flint is all smiles and welcoming. Jaxon is brooding and mysterious.

Weird and unexplainable things start to happen at the academy. The only thing they have in common is that Grace is around when they’re happening. Soon she discovers those supernatural and paranormal books she's read aren't so make-believe after all. And that yes, it appears she has “become the heroine in some YA romance.”

Crave will have you glued to your seat with so many mind-blowing moments. Forget about the rest of the world. Sleep is overrated. Welcome to Katmere Academy and Tracy Wolff’s Crave series. “This is going to be a lot of things. Easy isn’t one of them.”

“There’s not much to be afraid of when you’ve already lost everything that matters.”

“The truth is, Grace, sometimes the most obvious answer really is the right one.”

“Most of us are human, Grace. We just also happen to have a little something extra, that’s all.”

“You’re more than you think you are.”

New York Times and USA Today bestselling author Tracy Wolff wrote her first short story—something with a rainbow and a prince—in second grade, around the same time she forayed into the wonderful world of girls lit with her first Judy Blume novel. By ten she’d read everything in the young adult and classics sections of her local bookstore, so in desperation her mom started her on romance novels. And from the first page of the first book, Tracy knew she’d found her life-long love. A one-time English professor with over fifty novels to her name, she now devotes most of her time to writing romance and dreaming up heroes. She lives in Austin, Texas, with her family.