Review ~ SHOT IN THE DARK by Tracy Solheim 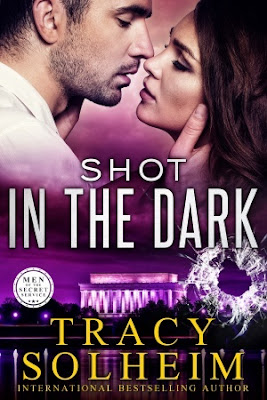 If there’s anything zoologist Josslyn Benoit abhors more than guns, its poachers. When an African “fact-finding” mission with a wildlife conservationist group results in one of their members being shot, Josslyn and the team must escape for their lives through the jungle. In order to obtain sanctuary from the local government, Josslyn calls in a favor from her older half-sister, the First Lady of the United States.

After suffering an injury in the line of duty, Adam Lockett, commander of the Secret Service’s elite team of snipers, is forced to work on a boring protective detail. Making matters worse, he’s assigned to guard the First Lady’s wild-child younger sister, a woman hell-bent on ditching her detail every opportunity she gets. Still, Adam is determined to bide his time until he is cleared by the doctors to return to the job he’s best at, even if the tree-hugging pacifist with the smoky eyes makes his job difficult.

Can these two opposites find happiness? Or is it just a shot in the dark?

Alexander Hamilton said, “If you stand for nothing, then what will you fall for?” This quote was repeated over and over in my mind, as I was reading Tracy Solheim’s Shot in the Dark. Dr. Josslyn Benoit, the US President’s twenty-eight-year-old sister-in-law, believes in protecting animals who can not protect themselves. Josslyn is a zoologist who would give her life in her quest to help wildlife and bring those who harm the animals to justice. For that, she is to be admired.

Shot in the Dark finds Josslyn and her team in Zimbabwe under the premise of filming a documentary. In actuality, she and her team are there to get the names of poachers and try to stop them. When things go south, Josslyn does the only thing she can. She calls in reinforcements in the form of the US Marines. Josslyn, known as Dolittle by the Secret Service, has something of a reputation with the service and the Marines who always come to her rescue.

Adam Lockett is the number one sharpshooter in the world and head of the Secret Service CAT team. Adam hasn’t had the best life and he's pretty guarded. Even his best friends Griffin Keller (Recipe for Disaster) and Ben Segar (Between Love and Honor) don’t know all of his secrets. After suffering a concussion while saving the President, Adam is reduced to babysitting Josslyn. While he isn’t foolish enough to think Josslyn won’t recognize him as the man who saved her years previously, he just hopes he can keep his attraction to her in check.

What should be an easy assignment gets complicated daily when Josslyn insists on continuing to identify the poachers. Josslyn’s blasé attitude puts her and her Secret Service detail in danger more times than I can count. Honestly, Josslyn is maddening! She makes it so hard to like her at times. She’s misunderstood often by a lot of people, however, she’s truly a dedicated scientist with a heart of gold.

Tracy has written an incredible cat and mouse romantic suspense. The intrigue she’s created with Shot in the Dark will keep you glued to the book. Just when you think you have things figured out, think again. I loved that she added humor to offset some of the intense moments. The romance between Josslyn and Adam is passionate. They were able to truly see each other on a deeper level than they each show the world. I was surprised to discover that these two who seem to have nothing in common actually have a lot in common. These surprising commonalities really helped to forge their relationship.

Shot in the Dark is already a long book, at 342 pages. However, I would have really liked to see how the future played out for Josslyn and Adam. I mean he is after all head of the Secret Service CAT team and his job is to protect the President of the United States. Josslyn is always going to need protection since she isn’t going to change what she believes in. How does Adam continue to work for the family?

Shot in the Dark was truly an enjoyable read. I should note that one scene, in particular, can be a little traumatic for some readers. I know it was for me. I loved that Tracy included an author’s note talking about elephants and the efforts to save them while banning the sale of their tusks. I loved that she gave names and links of organizations to donate to, in order to further the cause. I wish ALL authors and publishers would do this with controversial matters.

“Saving animals was her passion, her cause, her reason for getting up in the morning.”

“That girl is like Joan of Arc, singularly focused on saving animals from extinction no matter what the consequences.”

“You know what they say; there's a fine line between love and hate.”

“He's a decent man. But I've often sensed he's lonely. Just like you. It's nice when two kindred souls find one another.”

“Life is too short to hold back on love. You should always let the people you love know it.”

The Men of the Secret Service Series:

Tracy Solheim writes books with shirtless men on the cover. Some of them are actually best-sellers. The books, not the men. When she's not writing, she's practicing her curling. . . bottles of wine, that is. She's been known to cook dinner but no more than two nights in a row. Most days, she'd rather be reading, which to her is just necessary research. She lives in the suburbs of Atlanta with her husband and a neurotic Labrador retriever. Her two adult children visit but not often enough. (See the note above about cooking.) Check out her romantic suspense series featuring the Men of the Secret Service--shirtless, of course!