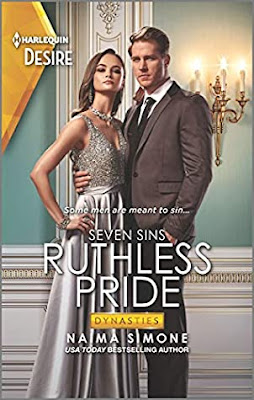 Some men are meant to sin…

Pride made him what he is.

Millionaire CEO Joshua Lowell earned his icy reserve and arrogant pride through painful experience. He refuses to allow gorgeous but determined reporter Sophie Armstrong to dredge up his family’s dark past—or circulate rumors of his secret child. But Joshua’s fierce pride is at war with his heated desire for Sophie, the only woman who could ruin him…or save him from himself.

Fifteen years ago, Vernon Lowell founder of Black Crescent Hedge Fund disappeared after stealing millions from his family and several clients. Harlequin Desire’s Dynasties: Seven Sin series deals with the fallout of his actions and how his family and the heirs of the families he stole from have been shaped by the past while dealing with the present. Ruthless Pride is the first book in the series.

Of Vernon’s three sons, Joshua was the only one to stick around their hometown of Falling Brook, New Jersey and deal with the fallout of his father’s crimes. Over the past fifteen years, Joshua has given up his passion for creating art to take over and restore Black Crescent's investment reputation. Joshua has made sure that the families his father stole from have been repaid. He’s watched his once vibrant and socialite mother lose friends, withdraw, and become a shell of the woman she once was. He’s lost the once close and tightknit relationships he shared with his brothers, as they see him being like their father. Joshua may not truly be a happy man, but he is content with his choices and the fact that he has restored his family’s name to a certain extent. Now all of this is in jeopardy when a reporter storms into his office.

Sophie Armstong is a no-nonsense investigative reporter for the Falling Brook Chronicle. She knows the story of Vernon Lowell has been told countless times before, but she’s done her research and she wants to cover the story again, this time, focusing on the past as well as the present and future. When Joshua continues to ignore her emails and phone calls, she decides to barge her way into his office to get the interview she wants. She confronts Joshua about a child he has who he isn’t supporting. When Joshua kicks her out, she has no choice but to make her own conclusions. Sophie soon realizes Joshua has no idea that he might have fathered a child. The two agree to work together to find out if her research is accurate and just who this child and mother are.

Naima Simone is one of my favorite authors. Her heroes are alpha through and through. Her heroines are smart, strong, independent women. Joshua and Sophie are no different. The attraction between these two was instant. Their passion was off the charts, with their coupling being raw and intense. I was definitely surprised to see that stiff, button-up Joshua was a dirty talker and a master of his words.

Unfortunately, I didn’t make a connection with these characters or this story. For me, the last ten percent of the book was the best, with the reemergence of Joshua possibly fathering a child. In the past, Harlequin’s miniseries have had a series arc that played out over the course of the series. “Someone is playing games. They have an endgame that I don’t know about and can’t figure out.” If the mystery of the series has to do with Joshua possibly fathering a child and someone blackmailing him, I don’t think that storyline was cemented enough to make me truly care and want to find out what happens. The next book in the series, Forbidden Lust is written by Karen Booth, another favorite author. The hero of that story has already been introduced and has said something that I’m curious about. For those reasons, I’m looking forward to reading the next book. I’m just hoping that there will be enough additional details about the mystery to make me want to continue reading the series.

“You can try to erase the past, but certain things don’t go away no matter how hard you try to bury them. The truth always finds a say of resurrecting itself.”