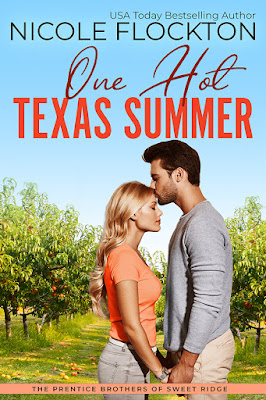 She’s been fooled before by sweet words and hot kisses.

Kelly Turner loves being a florist, and being asked to take the lead on the new site for the town’s festival is an honor. If only she didn’t have to work closely with the town player, Tate Prentice. After being burned once by a serial cheater, her inconvenient attraction toward Tate needs to be nipped in the bud.

Tate Prentice’s focus is on ensuring his father recovers fully from his stroke and making sure the family’s peach farm continues to thrive. When his brother nominates the farm to be the satellite site for the festival, he’s less than impressed. The only good thing is he’ll be working with Kelly – even though he knows she’ll never give him a second glance, not with his reputation.

The more time Kelly spends with Tate, the more she sees the man behind the reputation. Can she trust her instincts, or will her heart be broken once again?

“There was another reason I wanted to meet with you today, Kelly.” The teasing tone had exited Macy’s voice and Kelly gripped her glass a little tighter. Everything in her was screaming for her to run away.

“Not really. What I’m about to ask is going to be a big task. And I know it’s short notice, but if anyone can pull it together you can.”

The more Macy talked, the more apprehensive Kelly became. What did her friend want of her? “Okay, I’ll listen, but I can’t guarantee I’ll be able to do what you want me to do.”

A chair scraped over the floor and Kelly looked to her right. She should have controlled the urge. Tate Prentice had walked in and was sitting down at the table with his brother. He took off his cowboy hat and ran his fingers through his brown hair, giving it the just-out-of-bed look instead of the flatness from wearing his hat. Tate chose that moment to look over at her, and his eyes widened with shock at seeing her. He nodded and just the corners of his mouth quirked up and dammit, her heart gave a little flutter at the gesture.

Hell, she needed to get control of herself. This was beyond ridiculous.

With a concentrated effort she returned his smile and then turned back to look at her friends. Both had sly little grins on their faces.

Now would be the perfect time for a sinkhole to open up beneath her chair and suck her down. No way was she going to be able to get away by answering her friends with a vague response.

“What?” she asked, trying to feign innocence.

“That was an interesting exchange between you and Tate Prentice. Anything you want to tell us?” Charlotte asked before clamping her straw in her mouth and taking a long sip. If it was an attempt to hide her smile, it failed miserably.

“Nope. He’s just been coming into my store a lot recently to buy flowers. Wants a different arrangement each week.”

“Hmm, I hadn’t heard he got himself a girlfriend,” Macy mused, looking over at the table where the Prentice brothers sat. Kelly resisted the urge to glance over to see if they were looking at them.

“You think he has one girlfriend? Just look at him and you have heard about his reputation, right? I’m sure he’s got many girlfriends.” Damn, she hadn’t been able to keep the snark out of her voice. Not to mention how telling it was to comment about his looks.

“You sound a bit put out by that thought. Care to tell us why?” Macy asked.

No way was she answering that. And Macy still hadn’t told her why she wanted to meet with her. Yes, she could turn the conversation back in that direction.

“What I’d really like to know is why you asked me here.”

Macy wagged her finger. “Uh-uh, I know what you’re doing here, and it’s not going to work.”

Kelly rolled her eyes. “Fine. You want to know why I have a problem with him? It’s because I don’t want to think of my flowers as being a kiss-off gift to Tate Prentice’s latest bed partner.”

Of course, the song would finish while she was speaking. Her words echoed around the bar and everyone looked her way, including Tate and his brother.

Seriously, where was that damn sinkhole when she needed it?

Falling for the Texan releases August 4, 2020

a Rafflecopter giveaway
Follow
Posted by Kim at 1:44 PM