Review ~ BEAUTY AND HER ONE-NIGHT BABY by Dani Collins 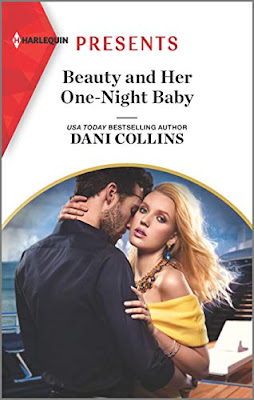 From irresistible beast in the bedroom…
to father of her child!

The first time Javiero Rodriguez sees CEO Scarlett Walker after their impassioned night together, she’s in labor with his baby! No matter how shocking the surprise, Javiero won’t let his son grow up in a broken home like he did.

Scarlett has worked hard for independence and she can’t accept empty vows. Yet the scars Javiero gained in a jaguar attack haven’t lessened the tycoon’s rugged appeal. Which means every day is a heated reminder of the pleasure they shared…and could share again!

Dani Collins’ Feuding Billionaire Brothers series is about two half-brothers who have to deal with a life-altering realization after their father passes away. Val Casale, A Hidden Heir to Redeem Him, is the oldest of Nikolai “Niko” Mylonas’ two sons. He is also the illegitimate son, a fact few people ever allowed him to forget. Javiero Rodriguez is Niko's son with his ex-wife Paloma Rodriguez. Both sons were afforded luxury, as long as they stayed under their father's thumb. And both sons were taught to hate each other.

Beauty and Her One-Night Baby is the second book in the Feuding Billionaire Brothers series. It takes place during the same time as A Hidden Heir to Redeem Him does. Needless to say, it is a standalone read. While I recommend reading both stories because they're both good, I HIGHLY recommend reading Beauty and Her One-Night Baby. Javiero is an amazing hero who owned my heart from the moment he appeared on the page. Even before he was attacked and mauled by a jaguar, Javiero didn't possess a classic beauty. What he did and does possess is a presence that captures your attention. He also has an incredible heart that allows him to move mountains for those he truly loves. The lady who is lucky to have the love of Javiero is Scarlett Walker, his father's assistant and his unexpected surprise newborn son’s mother.

I found that the story revolved more around Scarlett, her past and present, then Javiero. Since I read A Hidden Heir to Redeem Him I really wasn't that much of a fan of Scarlett. However, discovering what her past was and why she did things made my heart go out to her. Present wise, the story shows her dealing with a severe case of postpartum depression almost immediately after the birth of their son Locke.

Dani has once again written an incredible story. I was glued to the pages. Beauty and Her One-Night Baby will definitely go down as one of my favorite Dani Collins books.

A Hidden Heir to Redeem Him ~ Review

A Hidden Heir to Redeem Him ~ Interview

✍️ You can read my Beauty and Her One-Night Baby interview with Dani here. ✍️

Beauty and Her One-Night Baby is also the second book in the Once Upon a Temptation series, a collection of books by eight authors inspired by fairytales.