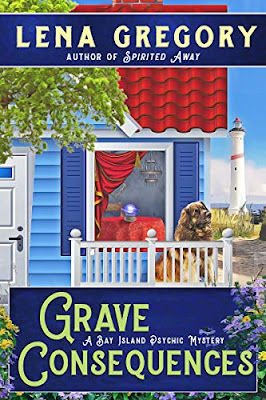 Cass Donovan is reminded that you can’t believe everything you hear, especially when it comes from the dead...

When stories begin circulating of a centuries-old ghost haunting the Bay Island lighthouse, Cass is caught up in mystical happenings of her own, with countless voices from the beyond all clamoring for her attention with dire warnings. But before she has a chance to learn whether there’s a connection between the rumored ghost and her restless visitors, the lighthouse keeper mysteriously falls to his death, and Cass’s reputation for communing with the dead lands her right in the middle of the police investigation.

Cass knows the victim was no saint, as he made little effort to hide his philandering ways from his wife or anyone else, and often acted out with no thought for the feelings of others. But had he finally gone too far, or were there more menacing motives behind his murder? As Cass begins building a list of suspects, including the man’s supposedly grieving wife and a mysterious new woman in town, she also turns her ear to those otherworldly voices, hoping for a clue. And as she begins to close in on the culprit, she realizes too late that if she’s not careful, she’ll soon be communicating with the dead in person..

The Bay Island Psychic Mystery series takes place on a small island nestled between the north and south forks of Long Island, New York. Although Bay Island is a fictional setting, it shares many characteristics with Long Island. The small farms Cass passes, the actual town of Bay Island, the beaches, and the lighthouses can be found throughout many small towns all over Long Island. Even the old, abandoned Madison Estate, a haunted mansion that makes an appearance in Death at First Sight and is mentioned in Grave Consequences but becomes the main focus of book two, Occult and Battery, is reminiscent of several old abandoned houses scattered across Long Island.

Because of its dependence on tourism, Bay Island is more impacted by the seasons than many areas, and each book in the series takes place during a different season. Each season brings its own, unique circumstances, which have a tremendous impact on the characters and the plot.

Book one, Death at First Sight, takes place during the fall, while tourists still visit and strangers in town are not uncommon. Traditions that are common to Long Island are mentioned throughout the story, such as driving out east on the north shore and visiting local farm stands for roasted corn and apple cider, apple picking, and pumpkin picking. The crunch of dead leaves beneath Cass’s feet becomes a major obstacle to overcome.

Book two, Occult and Battery, takes place during the winter. In an effort to increase her income when the tourist trade dies off, Cass sets up a psychic weekend, complete with séance, in the old, abandoned Madison Estate. Then a blizzard blows in, stopping ferry service to Bay Island, knocking out the electricity, and trapping Cass and her guests in the supposedly haunted mansion with a killer. The storm plays a major role in the plot, leaving behind deep snow, icy roads, and cutting Bay Island off from the rest of the world until ferry service can be restored. Even Cass’s dog, Beast, is affected by the snow, as Cass has to put off his much-needed training until spring.

The third book in the series, Clairvoyant and Present Danger, takes place in the spring, when tourists start to return to Bay Island and business finally starts to pick up. Shop owners begin to prepare for the mad rush of summer, and a new art gallery opens on the boardwalk. But the beaches are not yet crowded, as they will be during the summer months, so when strange things start happening while Cass is walking down the beach to Mystical Musings, no one is around to help. And when she and Beast stumble across a body in the dunes, Cass is on her own.

In Spirited Away, summer has arrived on Bay Island, bringing throngs of tourists and a heatwave just as Cass’s air conditioning unit goes on the fritz. With everyone on edge because of the heat, Cass’s group reading goes drastically wrong, and one of her good friends ends up accused of murder.

While Grave Consequences takes place as spring is turning to summer, and the tourist season is about to pick up, Cass is already thinking about increasing her income for the winter. When she realizes she might have the opportunity for Mystical Musings to be included on a haunted tour, she is thrilled, until the tour owner is murdered. 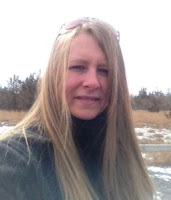 Lena Gregory is the author of the Bay Island Psychic Mysteries, which take place on a small island between the north and south forks of Long Island, New York, and the All-Day Breakfast Café Mysteries, which are set on the outskirts of Florida’s Ocala National Forest.

Lena grew up in a small town on the south shore of eastern Long Island. She recently relocated to Clermont, Florida with her husband, three kids, son-in-law, and four dogs. Her hobbies include spending time with family, reading, jigsaw puzzles, and walking. Her love for writing developed when her youngest son was born and didn’t sleep through the night. She works full time as a writer and a freelance editor and is a member of Sisters in Crime.

You can follow the Grave Consequences Blog Tour here.