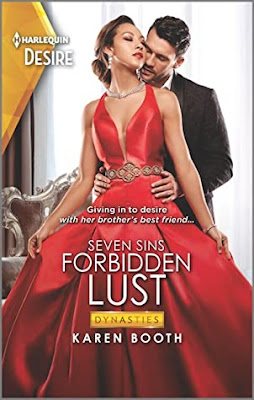 Giving in to desire
with her brother's best friend...

With the man of her forbidden fantasies?

A secluded island resort is the perfect romantic setting for the night of passionate abandon Allison Randall plans to share with Zane Patterson. Her elder brother's best friend has always been off-limits...and Zane is determined to keep it that way. But when a storm strands them together, neither can hold back. Everything Allison dreamed of is finally in reach...until unwelcome revelations threaten a rude awakening!

Karen Booth has once again proven why she's one of my favorite authors. Forbidden Lust is the second book in the Dynasties: Seven Sins series. It is a completely stand-alone read. However, the true background of the series is in the first book, Ruthless Pride written by Naima Simone. In that story, you find out what happened with Vernon Lowell and Black Crescent Investment over a decade ago.

Fifteen years ago, Zane Patterson met Allison Randall just as his whole world crumbled around him. Zane's parents were among the victims of Vernon Lowell's embezzlement from Black Crescent. Overnight, Zane went from being rich, popular, and going to private school to being broke and picked on in public school. His saving grace was Scott Randall, Allison's older brother. Scott didn't care about Zane’s past. He just offered him his friendship, a listening ear, and a place to escape the warzone Zane’s home had become.

Zane feels that he owes everything to Scott. That means that he can't make a move on Allison, even if she is the one who makes the first move. “I can’t do it. I can’t betray my best friend.” In a surprise twist of fate, Allison and Zane find themselves at Rose Cove, a boutique resort in the Caribbean owned by Scott and Allison’s aunt and uncle. Within two days of their arrival, the two find themselves all alone and stranded on the island as a tropical storm bears down on it. Thinking they're going to die, they give in to their passion, only to be rescued far too soon. Reality crashes in when doubts, omitted truths, and trust issues surface.

I love Forbidden Lust because it combines a couple of my favorite tropes, best friend/sibling, and forced proximity. I really like the characters of Zane and Allison. They were fun and playful. You get a sense of their passion and know that they truly care about each other. My heart went out to Zane for all that he’s been through and it ached for him when people said he needed to get over the past. I didn't like that Allison wouldn't take no for an answer and kept pursuing Zane, trying to get with him especially in light of the fact that she knew she was doing something that was going to hurt him.

My biggest issue with the book/series isn't author related. My issue is more of what I thought this series was going to be. I've read a couple of Harlequin's continuity series before. So far, this series doesn't seem to live up to the past ones I've read. I didn't think the first book cemented the mystery or driving scandal of the series. Yes, it's been established that this series will deal with the fallout of what happened fifteen years ago and that we as readers will see how the lives of the victims’ heirs have been affected. The issue of paternity has been brought up but nothing has really come of it. This book mentions a paternity test but that's it. If this is the mystery of the series, it wasn't advanced and that’s disappointing.

“The scars you get as a young person are always the ones that feel the deepest. It’s just the way life is.”

“When you’ve lost everything, it’s just easier to play it safe. Don’t risk a thing. Don’t put anything of importance on the line. Friendship. Your heart.”

📚 You can read an excerpt from Forbidden Lust here. 📚 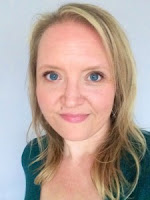