Interview & Giveaway ~ DASH AWAY ALL by Christina Freeburn 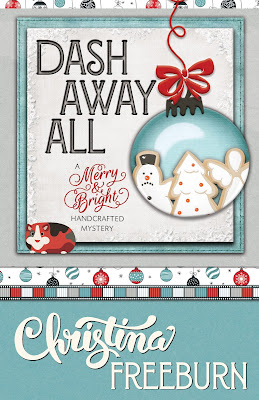 It’s beginning to look a lot like Christmas…Merry Winters is excited for her dream-come-true moment: Being an on-site crafter for a Christmas movie. The tidings of joy are short-lived as she finds herself becoming a referee, dealing with a raging Ebenezer, participating in a bucket brigade, and finding evidence in a “murder.”

Is someone trying to stop the production or is it tied to a secret someone has on Luna Carmichael, the star of the movie and the queen of Christmas?

When Marie, Luna’s assistant, stumbles away from a car accident and dies, Merry believes the accident wasn’t quite so accidental. Was Luna or Marie the target? Merry finds more questions than answers, but one thing is certain: Everyone has an ulterior motive for being part of the production—including Marie.

After another murder, Merry wonders if the deaths are tied to a baby born long ago and abandoned. And more importantly, will Merry live long enough to find out?

Hi Christina. Welcome to Read Your Writes Book Reviews. How are you?
I’m doing well.

You are a new to me author. Please tell me about your Merry & Bright Handcrafted Mystery series.
Merry Winters was looking for a new direction for her life as her primary purpose had been mom and her grown children have moved out and led their own lives. She figures now is the time to put being Merry first and ramp up her Christmas craft business by buying an RV which will allow her to attend more and further away vendor events…and ends up picking up a hobby of amateur sleuthing.

Outside of Merry and her beloved Ebenezer, who else will readers meet in your series?
Readers will meet Merry’s grinchy across the street neighbor Cornelius, her children Scotland and Raleigh (named after places Merry dreamed of visiting), her first ex-husband and father of her children Brett, her mom Gloria, and Officer Orville Martin who tries his best to convince Merry that crime-solving isn’t her job. And Brighton “Bright” Lane, her best friend and business partner who Merry has never met in person.

How did you go about creating your characters? Did you have any inspirations?
I created Merry when I was having trouble connecting with my character, Faith Hunter (heroine in another crafting series), that I had been writing. Faith was at a point in her life where she was planning her wedding and thinking of starting a family, and my youngest had just moved out. I just couldn’t connect with Faith and wanted to write someone who was going through some of my issues and wrestling with those feelings.

Merry Winters LOVES Christmas. Do you share her passion?
Yes! When I was brainstorming this series, I wanted a Christmas focus/theme and since I love crafting, I thought a crafter who specialized in Christmas was a perfect heroine for me to write.

When you sit down to write your mysteries, do you already know who the killer is and why they did it, or are you just as surprised as the readers?

I always plan who the killer is but so far, I’ve always been wrong. Usually, halfway through the book, I realized the person I pegged as the murderer is wrong and have to go back to the beginning and try spotting clues that I’ve added, without knowing, on who the murderer really is.

Dash Away All took an interesting turn after I received the first edit back, I realized the killer was wrong. Fortunately, my wonderful editor was on board with me making that change even though it meant a rewrite of some parts of the book.

What can you tell me about Dash Away All?
Merry is excited that she’s about to have a big dream-come-true moment after being hired as the on-site crafter for a Christmas mystery movie titled Dash Away All. She loves all things Christmas, especially Christmas movies, and is now, in a way, going to be in one. Her joy is short-lived when the night she arrives things start going very wrong, and the Queen of Christmas movies Luna Carmichael is a little more grinchy than one expects from a Christmas icon.

When Luna’s assistant Marie dies in an accident, Merry discovers things that point to the accident not being quite so accidental, and she can’t help wondering if Luna was the real target. And worse, Merry doesn’t know who to trust as everyone on set seems to either be keeping secrets or creating an alternative truth.

Dash Away All is the third book in the series. Can it be read as a standalone read?
I think it can be read as a standalone. In this book, besides Merry, the only two characters from the previous books making an appearance in Dash Away All are Ebenezer and her friend Paul McCormick. But as Merry does talk/think about what happened in the earlier books, it is possible some of the plots for the first two books might be given away.

If Merry was a real person and I could sit down and talk with her, what do you think she would say about you?
This is a great question. Merry would say that we have a lot in common like love of family, Christmas, and crafting. And that I can be a little indecisiveness at times which sometimes results in losing out on experiences. I need to stretch myself and take a few chances like she’s now doing with her life.

Christina, thank you so much for taking the time to answer some questions for me.

Christina Freeburn has always loved books. There was nothing better than picking up a story and being transported to another place. The love of reading evolved into the love of writing and she’s been writing since her teenage years. Her first novel was a 2003 Library of Virginia Literary Award nominee. Her mysteries series, Faith Hunter Scrap This Mystery and Merry & Bright Handcrafted Mysteries, are a mix of crafty and crime and feature heroines whose crafting time is interrupted by crime-solving.

Christina served in the US Army and has also worked as a paralegal, librarian, church secretary, and golf shop pro. She lives in West Virginia with her husband, dog, and a rarely seen cat except by those who are afraid and allergic to felines.

a Rafflecopter giveaway
Follow
Posted by Kim at 12:30 AM