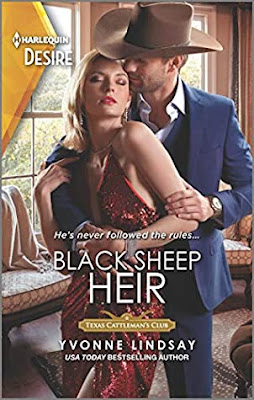 He doesn’t do whirlwind romances…

Until he meets her!

When rebellious heir and security mogul Miles Wingate accidentally runs into Chloe Fitzgerald—literally!—it feels like fate. She’s beautiful, intriguing and surprisingly interested in his estranged family. One night with Chloe leaves him suspicious—and craving more. But when a crisis forces Miles home to Royal, Texas, a string of bombshells awaits. Including one about Chloe and her hidden agenda…

Black Sheep Heir by Yvonne Lindsay is the second book in the Texas Cattleman’s Club: Rags to Riches series. For the most part, this is a standalone read. However, there are some series arc details found in the first book, The Price of Passion written by Maureen Child.

Black Sheep Heir is a romance built on revenge, redemption, and second chances. Miles Wingate is the only child of Trent and Ava Wingate to not go into the family business and work for Wingate Corporation. Instead, Miles struck out on his own. He left Royal, Texas for Chicago, Illinois, and established his own successful personal and cybersecurity firm. In doing so, a wedge was formed between his parents, his siblings, and him. To say Chloe Fitzgerald didn’t have an ideal childhood growing up is an understatement. As an only child, she had the burden of raising herself and taking care of her mother after her father died when she was eight-years-old. Money was tight and still is. But Chloe managed to go to college and become an elementary school teacher. For years, Chloe and her mother have talked about getting even and bringing the Wingate family down for what Trent did to their family. Chloe is ready to put their plan in motion and she has Miles Wingate in her sights.

Miles and Chloe share a really nice, yet painful meet/cute, when he literally runs into her, resulting in her breaking her phone and spraining her wrist. The two share an instant attraction that works out really well for Chloe who hopes to learn some Wingate family secrets to turn over to the press.

Wingate Corporation is in the midst of a security and PR nightmare, resulting in the company being investigated as a result of a fire at the WinJet division of the company. When eldest brother Sebastian calls Miles and tells him they need his expertise, Miles wants and knows that he has to go back to Texas. The problem is Miles’s attraction to Chloe. He doesn’t want to put his personal life on hold for his family so he asks Chloe to accompany him to Texas.

The overall plot of Black Sheep Heir was good. I don’t have a problem with revenge storylines. I just didn’t like the way the initial execution of the story went. I'm all about whirlwind romances and knowing that you've found the one, the minute you two meet. But the relationship between Miles and Chloe just happened too fast for me. The story is a little unbelievable in that Miles is a security guy and he acknowledges to himself that he usually does a background check on people but he didn’t with Chloe. He meets Chloe on a Wednesday morning and by Friday afternoon is flying her down to meet his family, during the middle of a major family crisis. If they would have met and a month or so would have passed after they dated a little, I don't think I would have had as much of a problem with the initial setup of the story. This resulted in me having a back and forth dislike of both characters initially. I spent most of the book being frustrated at Miles for his stupidity. To make the setup more believable, I think a small-time jump in the timeline would have worked. In the end, I did like the characters and the story once I was able to get past the whirlwind infiltration of the Wingate family.

Black Sheep Heir continues where The Price of Passion leaves off. The series mystery arc gets deeper and more interesting. The hero and heroine of the next book, The Paternity Pact by Cat Schield have been introduced. It’s a secret baby story, and I can’t wait to read it.

“Life is too damn short to spend it wondering what if.”

“True love never dies. It takes a hit sometimes, but it never goes away.”

“You decide how you treat people, how you’ll let them treat you.”

**Received a copy of the book from the publisher and voluntarily reviewed it.**

The Price of Passion ~ Review