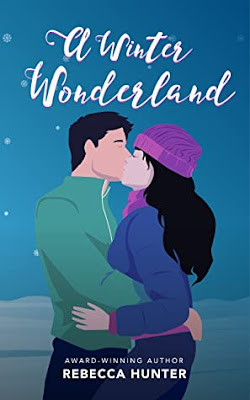 What's worse than a broken-down car during a winter storm?
When the hot tow truck driver is your ex-boyfriend, the one you left behind.

Coming face-to-face with Jace after nine years is a reminder of everything Selena tried to forget when she left her hometown. A very sexy reminder. And it’s even more dangerous when mixed with a little holiday magic.

Jace is supposed to be long over Selena, but he still hasn’t forgotten that she left for college without saying goodbye and never looked back. When she calls from the side of the highway, the temptation to see her again is too strong to resist.

Will a taste of holiday magic make the reunion more tempting?

** A shorter version of this sexy, second-chance romance originally appeared in the 12 Nights of Christmas anthology. It has been revised and expanded into a novella. **

A Winter Wonderland marked my first time reading Rebecca Hunter. I wanted to read this novella because it’s set during the Christmas season and is a second chance romance. I also heard there was a magical fruitcake involved that made people fall in love.

I found A Winter Wonderland to be different from other romances. This is a second chance romance, but what I found unique was that there wasn't any conflict between Jace and Selena. It's been nine years since they dated and it seems like they picked up almost where they left off. As characters, I really liked them.

The idea that an unknown person sends you a fruitcake and then you fall in love sounds intriguing. But I don’t see how that relates to this story. It seemed as if these two were going to be together regardless of the fruitcake. I can’t help but feel let down by the story. The magical fruitcake wasn’t explained which left me to wonder who sent it and if the story of fruitcake bringing people together was just a folklore of the town.