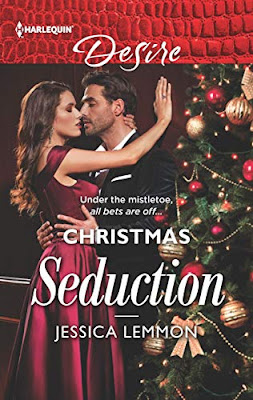 Under the mistletoe, all bets are off…

Christmas with his real family…
And his fake fiancé!

Developer Tate Duncan has everything under control--until he discovers his family isn't his own. Now, only the sympathy and sexiness of yoga instructor Hayden Green offers escape. He needs her. So he entices her to spend Christmas with him as he meets his birth parents…posing as his fiancée! But when they give in to dangerously real attraction, their ruse—and the secrets they’ve been keeping—could implode!

Christmas Seduction is the fourth book in Jessica Lemmon’s The Bachelor Pact series. In order to enjoy this book, you don’t have to read the previous three books. You do, however, have to read the third book, One Night, White Lies.

Weeks ago, Tate Duncan’s world was turned upside-down with the discovery that he was adopted. His fiancee has left him and he’s in the middle of an identity crisis. The bright light in his upside-down life is yoga instructor Hayden Green. When his newly discovered brother invites him to London to meet their parents for Christmas, Tate convinces Hayden to join him and pretend to be his fiancee.

Christmas Seduction was a good story. The characters were all likable and great. Tate has had to take on a lot. Throughout the book, I felt sorry for him for that. But at the same time, it seems like he handled things well until he didn’t. The woe is me act he tried to pull really wasn’t him. As far as endings go, I really LOVED the ending of this story. It had me smiling long after I was done reading the book. I highly recommend Christmas Seduction.