Interview & Giveaway ~ LOST ON THE WAY by Isabel Jolie 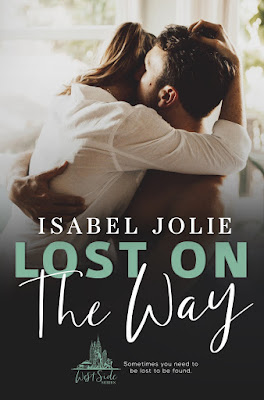 They were friends—just friends. Now they’re something else entirely…

Jason
Maggie was my best friend’s girl. When he died… I don’t have the words. Indescribable pain.

But we healed. Together. She got me through my illness and became my friend, my confidant, my family. She’s everything to me.

And I ruined it all last night.

One drunken night. That’s all it took. Now I’m lost.

I want her with everything I am, everything I have, but she can’t be mine. She deserves someone with better odds than the doctors gave me.

Now, if I can’t figure out how to go back to the way things were, I’ll lose the most important relationship I have. The only one that truly matters.

Maggie
Last night was the best—and worst—night of my life.

He’s made it clear, more than once, that he only wants a friendship.

And now he knows how I feel.

He’s my best friend. I love him —mind, body, and soul. We have a visceral connection others can’t understand.

The problem? He’ll always see me as his best friend’s girlfriend, no matter how many years pass.

I can’t lose him. If he wants to stay in the friend zone, I’ll need to somehow accept that and move on. I know it’s true.

But convincing my heart…well, that’s another story entirely.

One night of excess tequila changes everything for two codependent best friends. Will they lose all they had, or can they find their way to something even better?

*Lost on the Way is book four in the West Side Series, about a group of friends living on the west side of Manhattan. The series can be read in any order, and all are standalones. Lost on the Way features a sexy, angsty, friends-to-lovers romance with a guaranteed happily ever after. Download today and let the binge-reading begin!*

Hi Isabel. Welcome to Read Your Writes Book Reviews. You are a new to me author, so I’m going to ask you tons of questions. Okay, not really tons. But I do have a few. First off, tell me about your West Side series. What can readers expect or what have other readers already said about the series?
The West Side series is about a group of friends living on the west side of Manhattan. Each book is a different character’s love story, and in many ways, it’s an exploration of different tropes.

A reviewer recently wrote that all of the books were “heartfelt, believable and realistic.”

Can you please tell me about the book and the characters Jason and Maggie?
Lost on the Way is the story of two longtime friends in a co-dependent relationship. The relationship originally helped both Jason and Maggie as they grappled with the loss of a close friend during college. Over the years, Jason struggles with a number of issues stemming from his friend’s death and from his own battles with cancer. His friendship with Maggie largely enables him to avoid dealing with those issues. For Maggie’s part, helping others is a part of who she is and she constantly makes excuses for Jason, even when lines are crossed and he treats her poorly. They both love each other, but neither character is in an emotional place where they can have a healthy relationship with each other.

What do you love about them?
Jason can come across as cold and closed, but he loves deeply and is loyal to a fault. Maggie has a heart of gold, but I love her most when she’s pushed to her limits and prioritizes herself.

What’s your favorite part of a romance book to write and why?
I love fights because it’s a great opportunity for character reveals. We can see tensions and issues rising, and the fight is the big explosion, when it’s all flowing loose and a character who has been holding it in has to let it all go.

I don’t think anyone has ever said that. But you’re right, the fight scenes reveal more about the characters. Do you have a favorite scene from Lost on the Way and if so, can you please tell me about it?
Maggie and Jason exit his office after an intimate interaction that shocked and blew Jason’s mind. In his office, she unexpectedly fulfilled a fantasy he’d had for years. And at first, he’s blown away, but then when they exit, they’re holding hands and he freezes, overwhelmed by emotions. He’s once again crossed the line and he sees how Maggie is interpreting it. They run into his colleague and Maggie carries on an entire conversation that he’s present for, but he doesn’t absorb. He focuses on his physical symptoms and wonders if he’s getting sick and he spirals down the mental rabbit hole.

Later, we see the whole scene from Maggie’s point of view and it’s so clear the two had completely different perspectives on the discussion in the hall and what happened.

I think that kind of thing happens a lot in life and I loved how this hall scene reveals how different their two perspectives of the same event are.

That definitely sounds interesting. Can you tell me about one of the hardest scenes in the book to write?
There’s a funeral scene towards the beginning of the book that I pulled on memories of funerals I had attended in the past to write.

When a reader finishes Lost on the Way, what do you hope they take away from the story?
It is possible to work through our issues and find a way to the other side.

The therapy treatment that Jason opts for is perfect for him, because he doesn’t have to relive the trauma and he doesn’t even have to identify it. The treatment has had success specifically with PTSD patients. I don’t believe that specific treatment would work for everyone, but I do believe in the power of therapy. In the book, Maggie doesn’t need therapy, but she does have to find her independence and strength before she can be what he truly needs, which is someone who isn’t his crutch.

Isabel, thank you for taking the time to answer some questions for me.

Isabel Jolie, or Izzy to her friends, is an Amazon bestselling indie author with an unquenchable thirst for a good, sexy love story. Izzy’s heart pumps faster for stories with strong heroines, down-to-earth realism, and an unexpected twist.
When she’s not writing or reading, she can often be found with a glass of wine in hand relaxing with her husband, daughters, and good friends lakeside.
Izzy fills her Instagram feed with funnies, inspirational “brain candy”, and anything that meshes with her mood of the day. #mood.
Places to find Isabel Jolie:
Website | Facebook | Twitter | Goodreads | Instagram | Amazon Author Page