#BookReview ~ MAN DOWN by Kate Meader 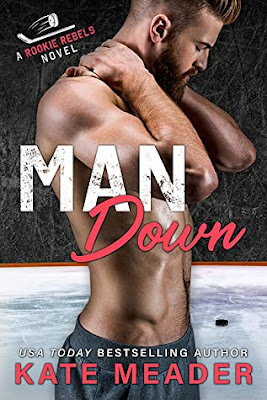 I’ve been texting the wife I lost, the woman I loved beyond measure ... Now someone else has answered back.

Three years ago, he lived through the car crash that took his wife and twins away from him—though “lived” barely describes his current state. Giving up professional hockey, going off grid, and drinking himself into oblivion are his coping mechanisms. Another is texting his dead wife about his days without her. Therapeutic? Doubtful. Crazy? Definitely. But those messages into the ether are virtually the only thing stopping him from spiraling to even darker places.

Until someone texts back …

Sadie Yates is losing it.

Suddenly guardian to a little sister she doesn’t know and a misbehaving hound she’d rather not know at all, she’s had to upend her (sort of) glamorous life in LA and move back to Chicago. The nanny has quit, the money’s running out, and her job is on the line. The last thing she needs is her sister’s hockey camp counselor, a judgmental Viking type, telling her she sucks at this parenting lark. Thank the goddess for her sweet, sensitive, and—fingers crossed—sexy text buddy who always knows the right thing to say. In the same city at last, they can finally see if their online chemistry is mirrored in real life. She just needs to set up a meeting …

A ruined man who claims to have used up all his love is surely a bad bet, but Sadie’s never been afraid of a challenge … even one that might shatter her heart into a million pieces.

Have you ever lost someone you loved beyond measure? Have you ever wished you could just talk to them again? Have you ever picked up your phone to send a text message to that person and stopped, with your hand hovering over the send button? That's the basis of Kate Meader’s Man Down. Except Gunnar Bond doesn’t stop himself from sending the message. For eighteen months, Gunnar sends messages to his deceased wife, telling her about his day and what he’s feeling. Then one day, someone responds.

Sadie Yates wasn’t looking to intrude on the private thoughts of someone else. When she responds to Gunnar’s texts she just wants to let him know that there’s someone reading his messages. She even offers to continue to listen to him. The two embark on a cross country texting friendship, never expecting to share names, pictures, or actually meet each other in person. The two do eventually meet, and things could not go worse. With a little time, patience, and understanding, things get better for Sadie and Gunnar and they act on their mutual attraction. However, things are not really that easy.

Kate Meader has once again written an incredible story. Man Down is a heart-breaking and gut-wrenching story. It’s a true journey of love, pain, and moving on. Gunnar miraculously survived a car crash that took the lives of his wife and young twins. Every day he is a man unto himself, living with survivor’s guilt. Thanks to Sadie being an unknown, unfamiliar, listening ear he’s able to slowly return to and function in the world around him. I loved their playful and often times cry inducing texts (he does tell her about the accident and what actually happened to his family). I loved them as a couple. Sadie awakes passion within Gunnar. She understands him even when he doesn’t understand himself.

While Man Down is a book that requires a box of tissue to be nearby, it still is written with Kate’s signature wit and laugh out loud moments. Characters from the Chicago Rebels series and previous Rookie Rebels books make appearances. However, Man Down is a standalone read. It also happens to take place at the same time as Instracrush.

~ Favorite Quotes ~
“Everyone needs a little help now and again.”

“Don’t ever wish you were a different person, only that you might handle things differently.”

“Regret is the worst emotion.”

**Received a copy from the author and voluntarily reviewed it.  Also purchased a paperback copy.**