Review ~ I'LL BE YOUR SOMEBODY by Savannah J. Frierson 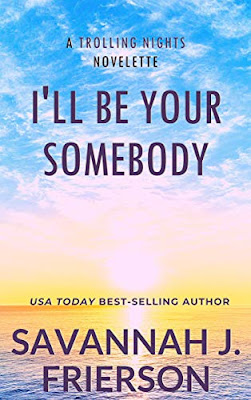 It's an arrangement between friends. She's not supposed to fall in love.

Coffeehouse entrepreneur Rosita Velez has kept her distance from Ulrich Brown from the moment she saw him on that fateful Trolling Night. Not because she thinks he’s a jerk not worthy of her time—the exact opposite, in fact. He's hot, funny, honorable, intelligent—and has she mentioned hot? He's the kind of guy who looks for forever while she's focused on the here and now. Completely incompatible. Then a doomed relationship between him and another member of the Femme Crew has her offering a shoulder, then more, to the grieving Navy SEAL.

A friends-with-benefits arrangement is perfect for Rosita, just scratch an itch with a gorgeous guy and be about her business. But when those scratches become caresses, the one part of herself she thought she could guard forever begins to slip right out of her chest into Ulrich’s waiting hands.

I really wished I’ll Be Your Somebody was more of a standalone read than what it was. I really missed getting to know Rosita and Ulrich and what their backgrounds were. However, I really loved them as a couple. Rosita wasn't looking for forever, but Navy SEAL Ulrich managed to sneak past the walls she's built to protect herself and her heart. He’s cool and relaxed. Ulrich is a man who knows what he wants and he wants Rosita. Ulrich isn’t pushy. In fact, he’s slow and steady. Ulrich is so patient that he sees a part of Rosita she would rather keep hidden and manages to turn a one-night stand into a long-distance relationship that Rosita doesn’t realize she’s in until she’s lost her heart to him.

I’ll Be Your Somebody features an Afro-Cuban heroine who’s more vulnerable than she wants to admit and an African American hero who is all about heart. Readers of Trolling Nights will be excited to catch up with Bevin and Tim. Get your translator app ready, because Rosita and Ulrich are going to have you swooning in Spanish.

“Ladies, I love you; but after what I just left, I need to hold this blessing close to my heart for a little while longer.”

Purchase I’ll Be Your Somebody from:
Amazon | Goodreads
The Trolling Nights Series:

You can read an excerpt from Trolling Nights here.

Savannah J. Frierson is a USA TODAY best-selling and award-winning author who crafts full, happily-ever-afters for readers who believe transcendent romances are worth the wait. She taps into characters’ softness to show vulnerability as a strength to be embraced and celebrated. Savannah’s characters find empowerment through love, and she hopes her dear readers do too.