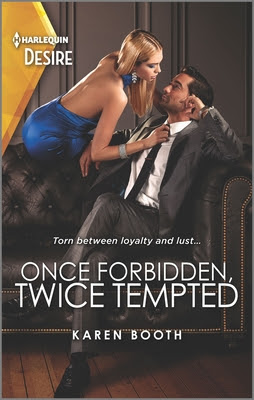 Torn between loyalty and lust…

A relationship so off-limits,

It could cost her everything…

Real estate agent Tara Sterling jumps at the chance to start fresh when she inherits part of her late ex-husband’s company. But claiming her rightful place at Sterling Enterprises means working side-by-side with CEO Grant Singleton, her ex’s best friend. Their long-simmering heat spells trouble as both vie for control of the business—and lose control of their thirst for each other…

I’m a huge Karen Booth fan. Her Harlequin Desire books are auto-buy/auto-read books for me. I may or may not read the blurbs. When I heard the title for her upcoming series was called The Sterling Wives, I was curious. I didn’t know what it truly meant. Well, hang onto your seats because Karen has written Once Forbidden, Twice Tempted and I am assuming the rest of the series as a mini soap opera.

Once Forbidden, Twice Tempted starts out with the freak accidental death of 41-year-old Johnathon Sterling. At the reading of his will, it is learned that he leaves his 51% ownership of Sterling Enterprises to his ex-wives (Tara and Astrid) and current wife (Miranda) equally. The succession plan for the company is that his best friend and business partner Grant Singleton gets named CEO. As you will find, even in death, Johnathon still finds a way to make Grant deal with and fix his mistakes and transgressions.

While reading the book, I had a hard time rooting for Tara and Grant. I viewed Tara as playing Astrid, Miranda, and Grant to get the CEO position at Sterling. I viewed Grant as a little puppy always trying to please. It turns out things are a lot more complicated than that. Tara and Grant have a history together. They both have life experiences including dealing with Johnathon that has shaped them into the people they are today. It’s quite interesting but is something that one must read to discover. As characters, I found them to be okay. I didn’t love them but they were likable once I got to understand them. The chemistry between them is hard to contain. It’s definitely combustible and anyone who sees them can see it.

For me, the most intriguing part of the book is that Tara is spearheading the drive to bid on a city development called Seaport Promenade. This was something Johnathon was interested in doing, but Gant was opposed to getting involved in it. I can say some interesting things are happening.

So far, The Sterling Wives series is reminding me a lot of Karen’s Eden Empire series. The Sterling Wives seem to be women who have been overlooked in some form or fashion. They are intelligent, driven, and in control of their own future. I’m looking forward to reading the next two books. The main characters have already been introduced and I’m excited to read their stories and learn more about them.