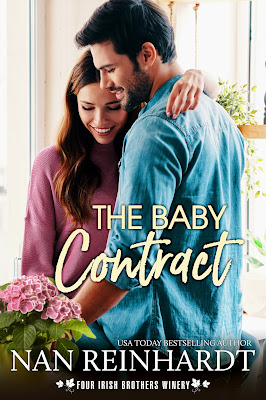 Firefighter and paramedic Tierney Ashton has always been a bold adventurer, but at thirty-four she longs to embark on a new adventure—motherhood. But who will be the father? Although financially challenging, a sperm bank appears to be her best option. That is, until she shares her dream with her long-time pal, Brendan Flaherty.

Government analyst and world traveler Brendan Flaherty returns home to River’s Edge to help out at his family’s thriving winery and his brother’s new community theater. He also plans to finally achieve his lifelong goal of writing a novel. But when Tierney shares her wish, Bren offers to be her baby daddy—with one condition. Marriage.

It seems like a perfect contract, but will love get in the way?

The Baby Contract marks my first time reading Nan Reinhardt. I wanted to read the story for several reasons: 1) it’s a friends-to-lovers story, 2) the heroine wants a baby and seems to have no problem tackling motherhood alone, and 3) I read an excerpt and loved the close bond the hero shared with his brothers. To my wonderful surprise, The Baby Contract wasn’t just a friends-to-lovers story, it was also a best friend/sibling romance.

Firefighter and paramedic Tierney Ashton and State Department Analyst/aspiring author Brendan “Bren” Flaherty have known each other almost their entire lives. Bren was Tierney’s older brother, Mike’s best friend. She used to follow them around like a third wheel. When Mike went into the military, he asked Bren to look after his baby sister. Neither expected Mike to die or for Bren and Tierney to become closer due to their shared grief. Over the years, Bren and Tierney eventually became best friends, often keeping tabs on each other.

Tierney is starting to hear the ticking of her biological clock. She’s ready to have a baby. It doesn’t matter to her that there isn’t a man in her life; she’s perfectly fine going to a sperm bank. When she tells her friends her plans, she’s surprised by their lackluster support. But she’s more surprised when Bren offers to marry her and create a child the old fashioned way.

I liked The Baby Contract. However, I just didn’t love it like I wanted to or expected to. There didn’t seem to be the standard or required conflict you typically find in romances. This was a story heavily based on friendship, family, and ultimately being true to yourself and your dreams. I really enjoyed the moment of intense drama Nan added to the story. The Baby Contract is the fourth book in the Four Irish Brothers Winery series. I loved that it was a standalone read, allowing first-time readers to fall in love with the brothers and their wives. My only complaint is that I personally couldn’t keep up with who was married to who and which kids belonged to which couple. I will say that I found the ending to be perfectly amazing. It actually brought tears to my eyes and ended the series very nicely.

Nan Reinhardt is a USA Today-bestselling author of romantic fiction for women in their prime. Yeah, women still fall in love and have sex, even after 45! Imagine! She is a wife, a mom, a mother-in-law, and a grandmother. Nan has been a copyeditor and proofreader for over 25 years, and currently works on romantic fiction titles for a variety of clients, including Avon Books, St. Martin’s Press, HarperCollins, Kensington Books, Tule Publishing, and Entangled Publishing, as well as for many indie authors.

Although she loves her life as an editor, writing is Nan’s first and most enduring passion. She can’t remember a time in her life when she wasn’t writing—she wrote her first romance novel at the age of ten, a love story between the most sophisticated person she knew at the time, her older sister (who was in high school and had a driver’s license!), and a member of Herman’s Hermits. If you remember who they are, you are Nan’s audience! Her latest series, the Four Irish Brothers Winery series is available from Tule Publishing and all book retailers.

Visit Nan’s website, where you’ll find links to all her books as well as blogs about writing, being a Baby Boomer, and aging gracefully…mostly. Nan also blogs every third Tuesday at Word Wranglers, sharing the spotlight with five other romance authors, is a frequent contributor the RWA Contemporary Romance blog, and she contributes to the Romance University blog where she writes as Editor Nan.