Review ~ VOWS IN NAME ONLY by Naima Simone 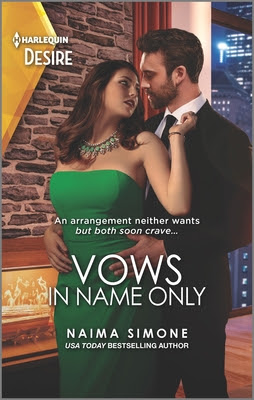 An arranged marriage neither wants, but both soon crave… from USA TODAY bestselling author Naima Simone!

Manipulated into a marriage of inconvenience,
until one sizzling kiss changes everything…

Devon Cole must marry Cain Farrell or lose everything. But she can never let her billionaire husband-to-be know why she agreed to her father’s dangerous machinations. Just as she’ll never know her father is blackmailing Cain to tie the knot, too. What kind of marriage can Devon even expect from a man with such cold eyes…and such hot kisses? She’s about to find out.

Vows in Name Only is the first book in Naima Simone’s Billionaires of Boston series. The premise of the series is that a cold, hard, unlikeable man dies and as a stipulation to his will, his three sons have to run his company together. The kicker is the sons don’t know the others exist until that moment.

In Vows in Name Only, the older legal son, Cain Farrell, is a tormented man who has had to endure the abuse of his father. Just when he thought he would finally get some peace, he discovers several big surprises. One, not only did his father cheat on his mother, he had children he never acknowledged. Two, the company Cain thought would be his, has to be shared with two strangers. And three, he has to live the next year in his father’s house, a house he hates beyond measure. As if all that wasn’t enough, Cain finds out that his father signed a contract for him to marry Devon Cole, a woman he has never heard of or met before.

As an only child, Devon promised her dying mother she would look take care of her father. She just never imagined that that promise would include leaving the big Italian family she loved so much behind or being forced to marry a man she doesn’t know. Devon is driven by misguided loyalty, which makes it easy for her to be taken advantage of.

I loved Devon for her openness, compassion, and sense of humor. I’m going to admit that Cain won’t go down as one of my favorite heroes. He didn’t worm his way into my heart. With his oftentimes abrasive attitude, I picture him more as a hero from Royal, Texas, and less of one from a sophisticated Boston society family. He’s a man who really seemed to keep himself locked away. I completely understand his need to protect himself but I wanted more from him.

Cain and Devon may have been forced to be together by their vengeful, conniving fathers, but it’s their love for the people they hold dear that keeps them together. That love for others eventually leads them to realize that their lustful attraction to each other is so much more. Unfortunately, their pasts, their inability to trust themselves or others, and the way they have been brought together stand in their way.

I think part of the beauty of Vows in Name Only is that through Cain and Devon’s back and forth interaction, they learned who the other truly was. This wasn’t a story where Devon needed to be rescued. She just needed to be reminded of her worth, and in turn, was able to remind Cain of his true worth, and in doing so embrace the new additions to his family, thus rescuing him.

For me, the true stars of this story are Devon and Cain’s younger half-brothers Achilles and Kenan. I’m looking forward to their stories and learning more about them. I have a feeling we’ll see more of Cain, and in turn, will see a different side of him.

~ Favorite Quote ~
“I’d rather be alone, giving one hundred percent to myself, than receiving fifty from someone else. I’m worth one hundred. I deserve it.”