Review ~ ALL HE WANTS FOR CHRISTMAS by Karen Booth 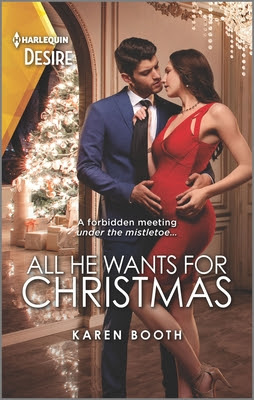 A holiday rendezvous leads to unexpected attraction…
for his brother’s widow.

For months, real estate developer Andrew Sterling has been laser focused on destroying Sterling Enterprises and bringing down his brother. But Johnathon’s sudden death changes everything—especially when Andrew learns his brother’s widow is pregnant. Andrew has never really seen Miranda Sterling…until now. As they get closer, he must fight the forbidden feelings that threaten more than his bottom line…

The Sterling Wives series is about three women who are connected to each other because they were at some point married to the same man. Upon his death, Johnathon Sterling’s will revealed that he had left 51% of Sterling Enterprises to the women equally. All He Wants for Christmas is the third and final book in the series. I’ve read all the books, and I think this can be a standalone read. However, events triggered in the first book, Once Forbidden, Twice Tempted continue to be played out in the second book, High Society Secrets and concludes in this one.

All He Wants for Christmas finds Andrew Sterling, Johnathon’s younger brother, trying to put a stop to the plan he set in motion to stop Sterling Enterprises from winning a major project with the city of San Diego. But things aren’t so simple. Andrew isn’t the only person out to destroy Sterling. Johnathon was a larger than life, charismatic man, but a man who didn’t always do the right thing and made enemies easily.

Andrew’s plan is to arrive in San Diego unnoticed, find the elusive Victor, and get him to agree to drop his vendetta against Johnathon and the company. Andrew is afraid that Victor’s quest for vengeance will affect Miranda and his unborn niece or nephew. But first wife Tara finds out Andrew is in town and suspects that he is behind all the problems happening at Sterling. While none of the “wives” truly know Andrew, Johnathon’s wife at the time of his death, Miranda doesn’t believe Andrew would do such a thing. When the truth is revealed, Miranda still has faith in Andrew and believes him.

Andrew and Johnathon have had a turbulent relationship most of their lives. Johnathon painted Andrew as a villain when he was anything but. However, without knowing Andrew, those in Johnathon’s circle believe every negative thing. Miranda's family only consists of her brother, niece, and her soon-to-be sister-in-law. She wants her unborn child to be surrounded by family and love, so she offers an olive branch to Andrew. In doing so, she discovers her true love.

When I heard about the Sterling Wives series, All He Wants for Christmas was the book I really wanted to read. I was intrigued by the taboo relationship of falling in love with your deceased brother’s pregnant wife. I wanted to see how Karen Booth would make it work and pull it off. She did an incredible job of showing Miranda and Andrew coming together as an extended family while becoming friends, and ultimately lovers. I loved them together. They don’t shy away from what or who connects them. They embrace the knowledge of that connection. But they forge their own bond and connection. I loved the curveball Karen put in. And I especially loved the ending she wrote. All He Wants for Christmas will definitely go down as one of my favorite Karen Booth stories.

**Received a copy from the author and voluntarily reviewed it. Also personally purchased a paperback copy.**