Feature Spotlight ~ RUNNING AWAY WITH THE BRIDE by Sophia Singh Sasson 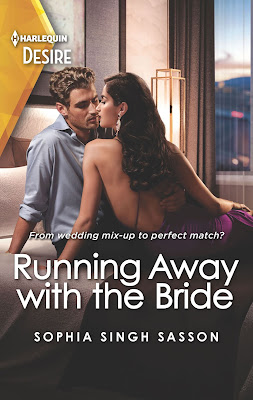 Stop the wedding! Steal the bride! And fall for a perfect stranger?

Billionaire Ethan Connors vows to stop his ex’s wedding so they can be together. But crashing the wrong nuptials and spiriting away the wrong wife-to-be is more than he bargained for! Divya Singh is beautiful, talented, passionate…and from a traditional Indian family who won’t accept him as a match for their daughter. Can Divya and Ethan’s unexpected relationship stay the course or will one of them run again?

Ethan Connors searched the stage on the back lawn of the Mahal Hotel where a mandap had been set up. The couple was seated on floor-level settees under a pergola-like structure in front of a small fire. A priest dressed in loose orange clothing chanted and threw things into the fire, making it crackle and smoke.

Ethan wished he’d paid more attention to the wedding sequence the one time he’d been to an Indian wedding with Pooja. He had no idea if he’d made it in time to stop hers.

At his outcry, the bride, groom and the dozen or so people surrounding them looked at him with surprise. The priest froze and the chatter of the crowd behind Ethan died. He could feel the stares of hundreds of guests on him. He tried to catch Pooja’s eyes but the heavy bridal veil covered her head and fell halfway across her face. The smoke from the fire swirled around her. He looked at the older Indian couple seated next to her. Were they Pooja’s parents? If the glare they were shooting him was any indication, they were.

A knot twisted in his stomach. After six months of dating, including three months of living together, she’d never introduced him to her parents, and he couldn’t pick them out based on the pictures he’d seen on her bookshelf.

A younger man seated next to the bride stood and made his way to Ethan. “I don’t know who you are but you’re interrupting my sister’s wedding. You best leave quietly before I call security.” The man’s voice was low and icy.

But Ethan was determined he wasn’t going to lose her again. He may have come to his senses in the eleventh hour, but he was going to save himself, and Pooja. She’d known the guy sitting next to her for three months. How could she marry him? I want to know my husband and be sure that we’re compatible, she’d said to Ethan. He and Pooja were compatible. Why hadn’t he seen that sooner? When she’d first brought up marriage—and how her family wouldn’t approve of her relationship with a white Midwesterner unless he put a ring on her finger—he’d thought he needed more time to figure things out. But what was left to think about? He was pushing forty. His brother was ten years younger and had been married for nine years and had two kids. Pooja was the only woman who had deemed him worthy enough to even discuss marriage. He wasn’t going to let her get away a second time.

Pooja was now standing, but Ethan still couldn’t get a clear line of sight through the crowd that was gathering around him. He hadn’t spoken to her since she walked out three months ago, but she’d sent him an email telling him she was getting married today. Why would she do that if she didn’t want him to make a grand gesture? It would’ve been helpful if she’d sent him some details other than that her groom was planning “a grand baarat down the Vegas strip.” He’d spent the entire morning driving up and down the strip, looking for a groom on a horse surrounded by a bunch of people dancing. The traditional Indian baarat, the arrival of the groom’s party, would be hard to miss, or so he thought. He’d been on the other side of the strip when he’d heard on the radio that traffic was snarled because of an Indian wedding, and he’d driven like a madman to get there.

He had charged in ready to take on the world, or at least a bunch of angry relatives, but now doubt snaked its way through him. Did Pooja really want him to rescue her? And how the hell was he going to get out of the hotel without hundreds of guests and hotel security guards stopping him?

Take off your veil and look at me, Pooja. He wanted to tell her that she didn’t have to succumb to her parents’ pressure and marry whichever Tom, Dick or Hari they had found for her. He was ready to step up and make a commitment.

Another man who bore a family resemblance to the one who’d identified himself as Pooja’s brother broke through the crowd and strode toward him. Who knew how many family members there were, and Ethan had zero backup. When will you stop being so impulsive? His mother’s familiar recrimination blared in his head.

He focused on Pooja, who was clearly looking in his direction, despite the veil on her face. “I’m sorry I was such an ass and didn’t realize how much you meant to me. I want to marry you. Run away with me.” Brother One whispered something into a phone, no doubt calling security. “We must go now!”

“Yo dude, this isn’t some Hollywood film. What do you think you’re doing?” Brother Number Two was now within punching distance and didn’t seem quite as reserved as Brother One. “My sister doesn’t know who you are. Get out before I…” He pulled his arm back, clearly preparing to punch Ethan in the face.

The Nights at the Mahal Series: 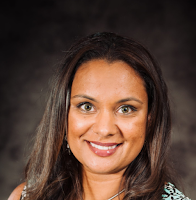 Sophia puts her childhood habit of daydreaming to good use by writing stories that will give you hope, make you laugh, cry and possibly snort tea from your nose. She was born in Mumbai, India, and has lived in the Canary Islands, Spain and Toronto, Canada. Currently she calls the madness of Washington, DC, home. She loves to read, travel to exotic locations, bake, scuba dive and watch Bollywood movies.