Interview & Excerpt ~ SCANDAL IN THE VIP SUITE by Nadine Gonzalez 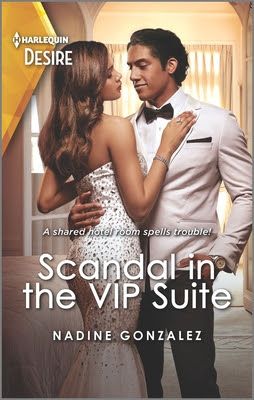 And a kiss as scorching as the Miami heat!

When Nina Taylor peeks into the luxury hotel suite that should have been hers, she's caught by the room's occupant, Julian Knight. The Hollywood bad boy quickly offers a compromise: why not share? Soon, the paparazzi is jumping to scandalous conclusions--and Julian and Nina share an incredible kiss. Good thing they're only booked for a week...because, boy, is she in trouble!

Hi Nadine. Welcome to Read Your Writes Book Reviews. How are you?
I’m doing well, thanks!

Congratulations on the release of Scandal in the VIP Suite. What else can you tell me about it?
This is the book of my heart. I took my time to dream up the plot and construct the story. Scandal is my third novel for Harlequin, but it is by far my favorite.

Scandal in the VIP Suite is the first book in your Miami Famous series. What can readers expect from the book and the rest of the series?
Miami Famous features yearly cultural events that take place in South Florida and attract the rich and famous and fabulous. Scandal features the Miami Film Festival. Book 2 will feature Art Basel, an international art show known for its wild parties. So, readers will encounter celebrities, but also regular people who are not all that impressed by their celebrity.

Tell me about Nina Taylor and Julian Knight.
Nina Taylor is the daughter of a Broadway actress who grew up estranged from her father’s Caribbean family. She is a writer and has kept a journal most of her life. These journals have a way of getting her in trouble.

Julian Knight is a British Jamaican action movie star trying to revive his ailing career. His violence-soaked movies have fallen out of favor with the public, mainly for their overly simple portrayal of women. To keep his star from fading, he must take his career in his own hands.

Their paths cross in Miami over a holiday weekend. Last minute, Nina is bumped out of her hotel suite to accommodate the actor. This doesn’t sit well with Nina.

What do you love about them?
I love the chemistry between these characters, their banter and private jokes. They were a joy to write.

Can you share with me the opening lines of the first chapter?
It seemed to Nina Taylor that she’d been traveling forever. Her flight was delayed at JFK, and the plane had spent an eternity in the queue at Miami International Airport before reaching its gate. Outside, she slipped on dark sunglasses to block out Miami’s Technicolor brightness and settled into the back of a cab. It was unreasonably hot—even for July—and the fake leather seat stuck to her bare arms. The driver loaded her bags into the trunk and slipped behind the wheel. “Where to?”

“Sand Castle? Good choice.” He adjusted the rearview mirror. “What brings you to Miami?”

A simple enough question. Most people wouldn’t have to lie.

What’s your favorite part of a book to write?
Definitely the grand gesture moment. It’s what I love best in romantic movies and it’s the easiest to imagine. The characters know each other well by this point and finding ways to melt the other’s heart is wonderful.

Tell me about one of your favorite scenes from the book, and why is it a favorite?
The meet-cute! Julian walks into his hotel room and finds Nina on his bed. That’s all I’ll say about that scene. I brainstormed with my sister over the phone until we got it just right.

Can you tell me a fun fact or two about Scandal in the VIP Suite?
Julian Knight is inspired by actor Idris Elba. I wanted to write a black British actor but with Caribbean roots. Honestly, I’m such a fan of Idris! I know I did not do him justice, but my intentions were pure.

Nadine, thank you so much for taking the time to answer some questions for me.
Thanks for having me!
You're welcome.

Nina was out of breath when she made it back to the third floor, just narrowly escaping a downpour. She entered the suite through the sitting room. The doors to the balcony were wide-open and there he was, standing with his back to her. Without the added layer of a jacket, she could plainly see the contours of his muscles under his T-shirt, and it was impressive—not that she cared.

Nina drew a breath for courage and joined him on the balcony, leaning against the rail. He smiled down at her, and she noticed that his soft brown eyes were flecked with gold. How had she not noticed before?

“There you are, Goldilocks.”

Nina cringed, but only on the inside. On the outside, she remained cool. “I spoke to the manager. They can put me up at another hotel.

“I love rain.” It was Miami! Summer showers were part of the package.

“What do you love? Singing in it? Dancing in it?”

“None of the above.” The sound of it was enough.

“Hate to rain on your exit parade, but if anyone is leaving, it’s me.”

“Stop thinking,” he said, interrupting, and yet his voice was gentle. “We agreed to make the best of this. Don’t flake on me now.”

Her gaze fell to his hands gripping the rail. In the movie, he’d gripped the steering wheel of his sports car in the same way. To take her mind off the soft color of his eyes, his gentle voice, firm grip and sculpted arms, Nina turned away and focused on the view. The palm trees swayed in the rain. Below, a cluster of tourists stood outside the hotel gates. Once dubbed the Playboy Mansion of the South, it was a Miami Beach tradition to pose on the stone steps—even in the pouring rain.

“Did I ever tell you about the time I worked here as a valet attendant?”

She had read about that online, but she couldn’t tell him that. “When would you have told me, JL Knight? We’ve just met.”

“Call me Julian,” he said. “Trash this hotel suite if you like. I don’t care. But I insist you call me Julian.” 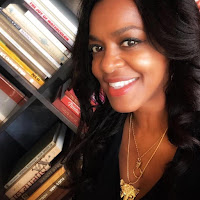 Nadine Gonzalez is an author and attorney. Her debut contemporary romance, Exclusively Yours, is published by Harlequin in the US and Mills and Boon in the UK. Kirkus Reviews has described her work as “a sleek and entertaining contemporary romance that offers vibrant settings, appealing characters, and a sexy and nuanced love story.”

Nadine lives in Miami and shares her home with her husband and their son.