Interview & Excerpt ~ THE SPINSTER AND THE RAKE by Eva Devon 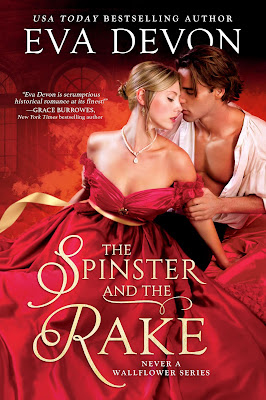 The marriage game is afoot in this clever blend of My Fair Lady meets Pride and Prejudice with a twist!

Edward Stanhope, the icy Duke of Thornfield, likes his life in a certain order. Give him a strong drink, a good book, and his dog for company, and he’s content. But when he goes to his library and finds a woman sitting in his chair, petting his dog, what starts as a request for her to leave quickly turns to a fiery battle of wits, leading to a steamy kiss that could ruin them both if they were caught.

So of course, damn it all, that’s when Edward’s aunt walks in, and thereafter announces Miss Georgiana Bly is the future Duchess of Thornfield.

Georgiana was content to be a spinster, spending her days reading and working to keep her family out of debt. But now her days are spent locked away with a growly duke, learning how to be the perfect duchess, and her nights spent fighting the undeniable attraction to a man who was never meant for her.

As their wedding day approaches, the attraction between them burns hot and fierce, but is it enough to melt the duke’s chilly facade?

Congratulations on the release of The Spinster and the Rake. What can you tell me about it?
It is a Pride and Prejudice meets My Fair Lady story! From the very beginning it’s a battle of wits and wills between these two. They want exactly the opposite things. . . but they both love each other’s kisses.

Tell me about Georgiana Bly and Edward Stanhope.
Georgiana Bly is clinging to gentility and has never had a season, so when she’s suddenly thrust into the position of duchess, she’s not happy about it. But she’s determined to make a success of it! In steps, Edward Stanhope, Duke of Thornfield, gives her lessons. Kisses happen. He is a gruff and grumpy Duke, but he really has the softest heart. You learn along the way exactly why he seems so cold and distant.

What do you love about them individually and together?
I love Georgiana’s optimism and tenacity. I love Edward’s determination and kindness.

These two? Even if they get truly furious at each other? They both lift each other up. I love that.

Can you share with me the opening lines of the first chapter?
Edward Andrew Richard Stanhope, sixteenth Duke of Thornfield, always did the right thing, even if doing so wasn’t easy.

What was your favorite part of this book to write?
I REALLY loved writing their meeting scene. They just burst into my imagination, banter ready to roll, and desire burning. It was a blast.

Tell me about one of your favorite scenes from the book, and why is it a favorite?
I absolutely love the scene where Edward and Georgiana play a game at a garden party. They tease each other mercilessly, but he lets his imperious guard down and shows all the company how superior she is in many ways.

Can you tell me a fun fact or two about The Spinster and the Rake?
Edward is on the Autism Spectrum. I really wanted to see representation in historical romance, and I adore him for his ability to navigate society.

Eva, thank you so much for taking the time to answer some questions for me.
It was such a pleasure! Thank you for having me!

Something terrible and incredible had overcome Miss Georgiana Bly.

She stood staring up at this massive man, totally unafraid, absolutely furious, and stunned because there was something about him that made it impossible for her to either give in to his order to leave, or to behave as she normally would.

He had done something to her.

Something had made her feel absolutely compelled to keep her spot in this room and not go back to face the glittering company.

Who did he think he was, ordering her about? She was tired of being told what to do.

From her mother, to her father, to her oldest sister, to her aunts, everyone seemed to think they knew exactly what was best for her. And, truthfully, she felt certain the only person who really did know what was best was herself. She was willing to listen to others, of course, and she’d often tried to take the advice to be more successful in company. But time and time again, she’d fallen short.

And though the ruggedly beautiful giant of a man was insisting she go back into the elegant masses, she had no place in that ballroom upstairs. Oh, her family had been invited, a rare opportunity for the Blys, who were genteel but only just. No doubt her eldest sister, Elizabeth, was thriving. She was an excellent conversationalist and admired wherever she went, but Georgiana?

Georgiana had a tendency to walk into potted plants or servants bearing wine, and her propensity for saying the wrong thing had become the stuff of legend in her house. She still had not lived down the episode with Lady Farthington and her unfortunate comments about the lady’s wig.

She’d learned this the hard way more than once. Despite the fact that she occasionally wished she was a swan sailing gracefully through society’s waters, she was, in fact, a practical duck of a person. And she wished her family would come to that same conclusion, so they would stop trying to make her something she could never be.

She wasn’t meant for the complicated demands of balls. She was meant for small libraries, such as the one she was standing in now, which was why she was not willing to go.

The ballroom was the worst possible place for someone like her and she was not about to let the threat of a kiss convince her to leave the safety of this nook.

When the beautiful, overbearing man had told her she needed to leave or be kissed, she had chosen to be kissed because he had to be bluffing. What sort of man did that, anyway? Stride into a room, bark orders, and then kiss one?

It didn’t seem to match anything she’d read in novels or seen in public life. So, even when he wrapped his massive arms about her, she still was not entirely convinced anything more would happen.

The cad was just trying to make her run.

Well, she wouldn’t run. She was not that sort of girl. And when she drew in the masculine scent of him, she ignored the thrilling of her body.

All would be fine. She wasn’t the slightest bit afraid. It mattered not that he towered over her and his shoulders had the sort of breadth to them that a Corinthian column possessed. He wasn’t the least bit frightening. Was he alluring? Yes. In fact, his lips were most interesting and she wondered what effect they might cause upon her own, for she had read of the pleasurable effects of kissing…

No, no, she truly didn’t desire to be kissed by him. It was all just a tactic on her part to call his jest. Such a girl as herself would never wish such a thing. But as she tilted her head back, gazed up at his remarkably sinewy person and eyes as dark as sin, she found it incredibly difficult to breathe.

Excerpted from The Spinster and the Rake, by Eva Devon. Entangled Publishing, 2021. Reprinted with permission.

USA TODAY BESTSELLING AUTHOR, Eva Devon, was raised on literary fiction, but quite accidentally and thankfully, she was introduced to romance one Christmas by Johanna Lindsey's Mallory novella, The Present. A romance addict was born. She devoured every single Lindsey novel within a few months and moved on to contemporary and paranormal with gusto. Now, she loves to write her own roguish dukes, alpha males and the heroines who tame them. She loves to hear from her readers.