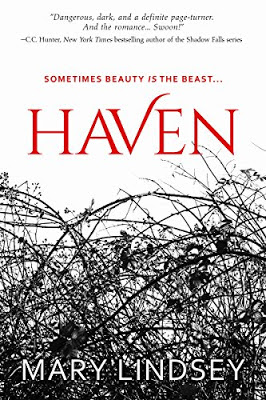 Sometimes beauty is the beast...

Rain Ryland has never belonged anywhere. He’s used to people judging him for his rough background, his intimidating size, and now, his orphan status. He’s always been on the outside, looking in, and he’s fine with that. Until he moves to New Wurzburg and meets Friederike Burkhart.

Freddie isn’t like normal teen girls, though. And someone wants her dead for it. Freddie warns he’d better stay far away if he wants to stay alive, but Rain’s never been good at running from trouble. For the first time, Rain has something worth fighting for, worth living for. Worth dying for.

I absolutely LOVED Love Me to Death by Marissa Clarke. I’ve been waiting for the next book in the Underveil series for years now. So when I heard Marissa’s alter ego Mary Lindsey had a YA/NA paranormal book coming out, I couldn’t wait to read it.

I went into reading Haven having read the blurb. I still had no idea what the story was about. From the beginning, the story had me intrigued and that intrigue continued as the mystery kept getting deeper and deeper.

Seventeen-year-old Aaron “Rain” Ryland arrives in New Wurzburg, a small town in Texas Hill Country, after his mother dies in a Houston area shelter. He’s surprised that his mother had a sister that he knew nothing about and is even more surprised at the things he discovers about his family. Friederike “Freddie” Burkhart isn’t your typical seventeen-year-old girl. She was conceived, born, and raised to be a leader. Freddie and Rain establish a friendship and that friendship grows to be so much more. But there are those who don’t want her to lead and view Rain’s presence as a threat. Soon, Rain and Freddie find themselves in a race against time to figure out who’s trying to kill them and stop Freddie from fulfilling her destiny.

First and foremost, I LOVED the characters of Rain and Freddie. They’re simply amazing. They’re strong characters on their own and even stronger and better together. Both believe in doing what’s right, no matter what it might cost them. Both are strong-willed and refuse to back down. I loved that there was a huge mystery/suspense element to this story. The secondary characters definitely help in keeping you guessing as to what was happening.

For me, Haven was all about trying to figure out what was going on in the town of New Wurzburg and who you could and couldn’t trust. For that reason, I’m not going to get into all the details. Haven was an addictive read. It’s like Twilight and Grimm rolled together. While there is conspiracy and murder, this story is so much more. Haven is about family, friendship, young love, and believing in yourself. Ultimately, it’s about finding out where you belong and where your safe haven is.

Mary Lindsey is a multi award-winning, RITA® nominated author of romance for adults and teens. She lives on an island in the middle of a river. Seriously, she does. When not writing, she wrangles her rowdy pack of three teens, two Cairn Terriers, and one husband.
Inexplicably, her favorite animal is the giant anteater and at one point, she had over 200 “pet” Madagascar Hissing Cockroaches. The roaches are a long story involving three science-crazed kids and a soft spot for rescue animals. The good news is, the “pet” roaches found a home… somewhere else.
Represented by Kevan Lyon of the Marsal Lyon Literary Agency
Also writes under the pseudonym Marissa Clarke.
Places to find Mary Lindsey:
Website | Facebook | Twitter | Goodreads | Instagram | Pinterest | Amazon Author Page