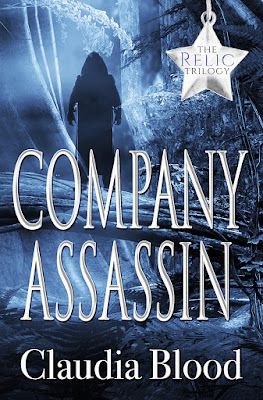 It’s Duff Roman’s eighteenth birthday, but no one is lighting candles.

Turning eighteen in the orphanage on Kalecca means starvation for those who aren’t hired into a Family. Outside the Family compounds lies the jungle. And in the jungle lies death. And Relics—the only real currency on Planet Kalecca.

The orphans are Duff’s family, and he’s sacrificed everything to keep the orphanage running, even his chance to move on. Now, at eighteen, he has no choice but to leave. Without him to bring in extra money, the orphans will starve under the Company’s control. Duff's only chance to save them is to find a spot on an independent crew and hopefully find a Relic to sell.

A seemingly chance encounter with Z, leader of the most feared independent crew, offers Duff his opportunity to score a Relic. And offers Z a chance to relieve the guilt he feels over his past.

But a company assassin has plans to lay waste to Duff's future, and the orphanage as well.

Lessons I learned from my villain.

Ravenne from the Relic Trilogy is my favorite villain. I think she will always hold a special place in my heart.

She came from my own paranoia with my kids. Being a mom is scary. It feels like there are so many things that I could do wrong. Kids don't come with instruction manuals and even if they did, they'd be wrong and out-of-date. And the worst part, I won't know until years later (or at all) if something I did was 'wrong'.

Even if I didn't scar my kids for life, the world felt like it was full of dangers. I had to stop watching horror movies because I didn't need any more ideas on the terrible things that could happen. Even though intellectually, I knew they were possible but highly improbable, emotionally they still stalked me.

Ravenne had the worst happen.

She blamed herself and became obsessed with bringing her daughter back. Not by magic or mystical charms, but by science. After all, she'd just invented a drive that approached the speed of light.

I can respect that she never gave up on her goal. I very much do not agree with some of her choices, but I understand why they were the choices she made.

Writing her made me realize I was focusing on the wrong things. I am generally a very positive person, so why not focus on the good? Why not look for ways to have fun together? I should appreciate the moment instead of worrying about the future.

I will make mistakes. I strive to do the best that I can for my kids, but I need to enjoy the here and now.

Z took a small sip of the best whiskey they had at the Inn. It burned the back of his throat. He stood as if he didn’t care that he was the only freelancer in the place. He stood as if he’d only come here to enjoy some whiskey. It was good. It left a sweet smoky taste in his mouth. But he was here to gather information and to sort out a few things before going back into the jungle.

He’d gotten good at watching a room without seeming to. The Families had finally calmed down enough to resume the conversations that had stopped when he’d walked in.

They all recognized him as an ex-company man. The first time he’d come in here, there’d been bets on how long before he ended up dead. No one knew that he had something over Ravenne, which made him harder for her to kill. Not impossible, just harder.

He took another sip of the whiskey and closed his eyes as if he was just enjoying a drink. That allowed him to focus his senses on the conversations. No one was talking about the orphanage or Duff. They’d been long forgotten. There seemed to be a general unease in the room. Too many high ranked Family men were here. Odds were good they would meet in secret later. There was definitely something going on.

He’d also noticed that there seemed to be less Relics in the normal spots and that the company was paying a bit less. That would be a troublesome trend.

Claudia Blood’s early introduction to Dungeons and Dragons, combined with her training as a scientist and a side trip into the world of IT set her up to become an award-winning author of Science Fiction and Fantasy.