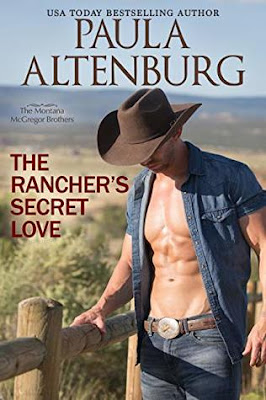 Could home be 'on the range'?

After teaching at a prestigious university, Luke McGregor is headed home to his family's ranch in Grand, Montana, to help his brothers raise their baby niece and nephews and to help save the struggling ranch. His long-time girlfriend wants no part of playing cowgirl and dumps him fast. Luke commits himself to being home for at least a year and throws himself into family and ranch life. A chance meeting with a beautiful and free-spirited woman and a promising first date makes him wonder if his place is necessarily in a big city.

Plucky Mara Ramos has lived much of her life on the road as a performer, but a dance injury, that permanently sidelines her professional career and ends her fling with a famous pop star, strands her in the middle of Montana. She likes the friendly small town and soon opens a dance studio intent on building a new life for herself. She enjoys inspiring her young students, but she can’t help but feel she needs more. A casual date with an enigmatic, flirty stranger, who is so much more than a cowboy, teases Mara with the possibility of putting down roots and finding a happy every after.

When Luke’s former girlfriend announces she’s pregnant, he's faced with the decision of a lifetime. If he's all about family, can he make a decision that will keep Mara in his life?

The Rancher’s Secret Love is the second book in Paula Altenburg’s Montana McGregor Brothers series. The story takes place at the same time as the first book, The Rancher Takes a Family. As a result, this can be read separately.

After his younger sister, her husband, and both his parents are killed in a plane crash, Luke McGregor takes a leave of absence from his college teaching job. His older brother Jake has been given custody of their nephews and niece, as well as the family farm. Luke returns to Grand, Montana to temporarily help out. In choosing to be with his family, his girlfriend chooses to end their relationship. Mara Ramos is the best friend of Lacey Anderson who eventually becomes Luke’s sister-in-law. Mara is a former dancer, who now teaches dance and owns a dance studio in Grand. They initially start to spend time together when Luke takes one of his nephews to her studio.

As the two start to spend more and more time together, their relationship grows. Things progress but hit a snag when Luke’s ex shows up and announces she’s pregnant. From this point, things with this story get interesting. It seems there is absolutely no way there’s going to be a happy ending for anyone. Paula has written good characters and a plot twist I don’t think anyone will see coming. She made Luke and Mara work to be together. Fortunately, that work really paid off.