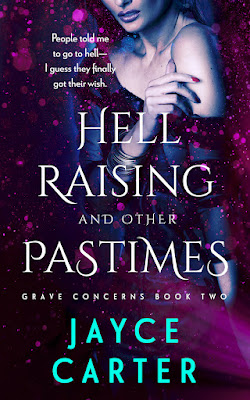 Lots of people have told me to go to hell—I guess they finally got their wish.

I’ve finally accepted the fact I might not be entirely human, so you’d think life could give me a minute. Instead, I find myself sucked into hell at Lucifer’s demand, and I realize death is even more complicated than my life was.

I’m still searching for how to stop the missing spirits before it’s too late, and with no suspects other than Lucifer, I have to survive hell—where everything wants to kill me—so I can confront the devil himself. Not even my love life can be simple, though. Troy is terrified of his werewolf side hurting me, Kase and Grant are lying to me, and Hunter is keeping his own secrets. I know better than to trust anyone, especially the men who have taken over my life.

Get to Lucifer’s Court, find out the truth about the missing spirits, figure out exactly what I am, and try not to die along the way. Oh, and don’t fall in love with the men who will for sure break my heart and possibly get me killed.

How to keep the sex fresh in your writing
While my Grave Concerns Trilogy has a bit less sex than some of my other work, there is no doubt that there is still enough for it to easily fall into an Ikea manual of: put peg A into slot B. The reality is that keeping things fresh can be difficult, because many of the mechanics remain the same. Sure, we can get crazy with toys and locations and the sort of positions that require a level six yogi to do safely, but in the end, sex is sex.

So what makes it different? What makes two scenes that include the same basic mechanics unique and worth reading?

Two scenes identical in basic action—rough kissing, followed by oral sex, then some wonderful penetration, with plenty of orgasms thrown into the mix—can be vastly different based on the internal dialogue and context. Perhaps scene one involves old flames with a lot of heartbreak between them, which makes it both a homecoming and a mistake. Maybe the FMC in that is unsure, because she getting her heart trampled for the third time is just too dangerous, while the MMC is tired of going to sleep alone and dreaming of her, which makes him more domineering and rougher as he tries to prove how much he wants her.

In contract, maybe scene two are strangers, people who have never met, don’t have each other’s bodies memorized. They saw each other after MMC was left at the altar and the FMC wants nothing more than to be brash and bold when she’s always been told she is meek and quiet. These two have a drink together and end up in the alleyway behind the bar, both with something to prove about moving forward, about who they want to be.

Two scenes with the same sexual playbook end up becoming vastly different because the people engaging in them are different, and because the reasons they’re doing it—beyond just the orgasm—are different.

So to me, the way to keep sex fresh is to make sure you know your characters, their motivations, theirs wants and their fears, and keep those things in mind as you write. It goes from being a blow-by-blow boring sex ed to being an actual passionate encounter between two very real and complex characters.

Or, more than two, as if the case with my work!

I moved my fingers down over Kase’s wrist to touch his hand, to where I could brush his actual skin.

The moment it happened, however, the room spun again.

When the breath rushed from my lungs, I realized it wasn’t the room spinning this time but me.

I found Kase’s face above me, his lips peeled back to expose his fangs, his eyes glowing red.

All those times I’d though he looked scary before were nothing. I’d never seen this face. The idea he was older than Colter didn’t seem so crazy anymore.

If his face wasn’t enough, the hand I’d just touched was wrapped around my throat.

He could have snapped my neck right then, ended me without a second thought. It was a reminder of just how out-powered I was by these supernaturals. I had started to feel myself, to think I could stand toe-to-toe with them, especially after shoving that shadow from Troy, but in that moment Kase showed me how wrong I was.

Jayce Carter lives in Southern California with her husband and two spawns. She originally wanted to take over the world but realized that would require wearing pants. This led her to choosing writing, a completely pants-free occupation. She has a fear of heights yet rock climbs for fun and enjoys making up excuses for not going out and socializing.