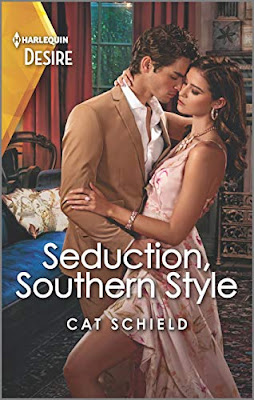 She’s here to help her sister and won’t be taken in by any man’s Southern charm, sex appeal…or insistence on questioning her intentions.

Ulterior motives are the name of the game.
But is she willing to play?

Art consultant Sienna Burns came to Charleston to support her adopted sister as she met her birth family—not help her take over their shipping company! Sienna’s further flustered that the CEO, Ethan Watts, is the most irresistible man she’s ever met. Cozying up to him for intel should be easy. But as she falls deeper for Ethan, Sienna must decide where her true loyalties lie…

Seduction, Southern Style is the fifth book in Cat Schield’s Sweet Tea and Scandal series. I recommend that you read Seductive Secrets first, as events in that story carry over.

Ethan Watts has helped his adoptive family finally track down his long-lost cousin Teagan after his Aunt Ava’s death. Teagan was adopted as an infant without the family knowing she even existed. With the discovery, Ethan starts to feel more of an outsider than he already did. He decides to use the same genetic testing facility to see if he can find his own birth family.

The arrival of Teagan and her older sister, Sienna should be a time of celebration for the Watts family. Some members are ecstatic. Some members are a little apprehensive. One of those members is Ethan, who receives an anonymous email. “Teagan Burns intends to become the next CEO of Watts Shipping. She is ruthless and will use every trick in the book to get her way. Watch your back. - A friend” The problem is, Ethan is the current CEO of Watts Shipping. While Ethan doesn’t trust the email. He knows he would be a fool to not heed the warning and keep a close eye on Teagan and her sister. Ethan’s solution is to get close to Sienna and find out what Teagan plans to do.

Sienna Burns is the oldest biological daughter of the Burns family. The family is wealthy, owning a real estate empire in New York. Unlike her older brother and Teagan, Sienna has no desire to work for the family business. In fact, Sienna doesn’t really have anything in common with her family. Sienna travels the world as an independent art consultant and prefers to be in the background. She’s smart and charming but with her additional weight, plain power suits, sensible hairstyle, and appearance, she’s never been up to par for her family and definitely not in the same league as Teagan.

It’s as plain as day for anyone paying attention that Ethan and Sienna are attracted to each other. One of those people paying attention is Teagan, and she encourages her sister to distract Ethan in every way possible, while she convinces the Watts family that a true blood relative should be running the company. But Ethan is on to both Teagan and Sienna and has his own plans for the Burns sisters. His plans don’t include truly falling in love with Sienna, but that’s what happens.

I’ve loved Ethan since he appeared on the pages of Seductive Secrets, and I liked Sienna. Seduction, Southern Style wasn’t the story I envisioned for Ethan. However, I think it’s the story he needed to have. He and Sienna have a lot in common. “The reason he’d been so drawn to her was that they both felt like outsiders around the people they loved.” When they’re together, it’s like they’ve known each other forever and are two pieces to a missing puzzle. Immediately, I developed a dislike for Teagan. Man oh man, Cat did a wonderful job of making me despise her. Since the blurb doesn’t mention something really important that happens with this story, I’m not going to mention it either. I will say the Sweet Tea and Scandal series isn’t over. While Seduction, Southern Style has some scandal, the next book features Teagan and promises to be explosive and have scandals galore.

**Received a copy of the book from the author and voluntarily reviewed it.**