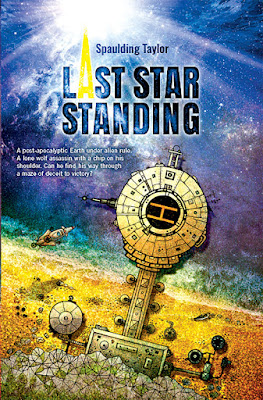 Aiden has always felt like an outsider. After the rebel assassin is captured and imprisoned by the world’s galactic overlords, he awaits execution. Then a mole working for the occupying regime alerts him to a plot that could destroy the entire resistance…

Engineering a daring escape, Aiden’s growing feud with the new rebel leader leaves him out in the cold and smouldering with resentment. Faced with deceit and betrayals on every side, he recruits a group of overlooked outcasts and stakes everything on one last mission.

Can the restless, reckless Aiden take a stand long enough to save humanity from enslavement?

10 things most people don't know about me...

Nothing. Clean as a whistle. Until my massive hand grasped hold of something, something which must have blended into its background so perfectly that I hadn’t even spotted it. Something alive, nestling under the co-pilot’s seat. I couldn’t believe it. A live gromeline. Trembling, possibly with fury, and trying in vain to squeeze back. Grabbing my trophy – I could feel its hot little heart throbbing like an injury against my palm – I hopped out of the plane so fast that my wound protested.

Bully raised one eyebrow. Two would have been overkill.

‘Bully, you are not going to believe this. I found a gromeline!’ The gromeline – only about fifteen centimetres – bit my finger, hard, even though I could have easily crushed its entire body with my fist – and probably would have, had I been a tester, and not merely disguised as one.

Feisty little gromeline. I flicked it lightly with my sausage-sized finger. When it protested, I growled, ‘Cheese it, munchkin,’ though I could feel it struggling obstreperously against my palm.

Bully was intrigued. ‘Is it genuine?’ ‘Of course it’s genuine. It just bit me, didn’t it?’

Bully probably considered this no proof. But they’re rarer than clean air these days and his fascination was obvious. Now gromelines come from the farthest galaxy so far discovered, can speak any tongue and own enviable mental powers. They are also brave to the point of stupidity and ludicrously small. This one was mouse-coloured – they can be spectacular – with tiny red eyes. Few humans have ever seen one.

Alice (Spaulding Taylor) McVeigh has been published by Orion/Hachette in contemporary fiction, by Unbound Publishing in action/adventure and by Warleigh Hall Press in Austenesque fiction. Her novels have won Gold Medal/First Place is the Global, eLit and Pencraft Book Awards, been runner-up in the Independent Press Awards, finalists in the Eric Hoffer, Rone and Wishing Shelf Book Awards and selected by Shelf Unbound as one of the "top indies" of 2021. Two of her novels are currently finalists in the CIBA Book Awards (the Cygnus and Goethe Awards). Her most recent novel (Harriet: A Jane Austen Variation) was just selected as Editors’ Pick “outstanding” on Publishers Weekly.
A professional London cellist, Alice lives in London and Crete with her professor husband: their only child is completing her Masters in Chinese Literature. They also share two miniature long-haired dachshunds and an incurable addiction to tennis.
Places to find Spaulding Taylor:
Website | Facebook | Twitter | Instagram | Goodreads
You can follow the Last Star Standing Book Tour here.